YOUR HELP IS NEEDED ASAP!

If you believe in having YOUR voice represented at the Republican legislator's table ...Your help is needed asap. THEY WILL BE VOTING SOON ...maybe this coming week!

Please contact the Republican House Caucus lawmakers and tell them to oppose the removal of any SC Freedom Caucus member. Ways to contact them are listed below.

Read the below article to understand why we need to contact the SC House Republican Caucus.

Look at the goals of the SC House Republican Caucus below. Clearly the SC Freedom Caucus members agree with their goals!
So, why are they denying them a seat at the table? The problem is that the oath (rules) that require members to sign are actually limiting the rights of our elected representatives who belong to the SC Freedom Caucus. They don't want to give up their right to endorse better candidates in the next election cycle.
Ask yourself, why are the Republican Leadership wanting our duly elected representatives to sign a document stating they swear loyalty to an incumbent who might be voting against the goals set?
Why can't an elected Republican representative hold their colleagues accountable by endorsing a better candidate?
Is this a strong-arm tactic to keep the status quo in place and protect incumbents who might be a RINO/Centrist?
Preventing the SC Freedom Caucus members into the SC House Republican Caucus just because they refuse to swear loyalty to an incumbent in an election year is questionable cronyism. This is wrong. Our elected representatives should be able to support any Republican who files to run against and challenge a present Republican that they wish to support. All elected Republicans need to be able to hold their colleagues accountable for their voting record.
Call, or email or “MESSAGE” THE SC REPUBLICAN CAUCUS AND TELL THEM YOUR THOUGHTS. (Suggested message can be found below.) 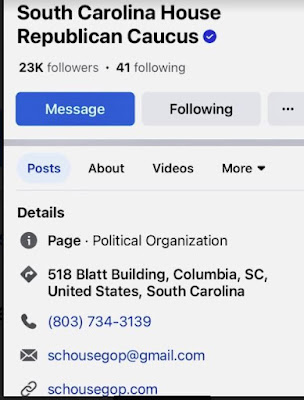 Here's their Facebook Page link to private message the Republican Caucus: https://www.facebook.com/SCHouseGOP?mibextid=LQQJ4d
Here is a suggested message to send:
“Do not vote to prevent the SC Freedom Caucus members a seat at the table in your deliberations. They too believe in your push for economic prosperity, education reform, limited government, personal freedom, and law and order.
They too are committed to introducing and supporting legislation in the upcoming session that will elevate our state by focusing on each of these tenets! To deny them membership is an assault on the millions of constituents who voted them into office! WE THE PEOPLE ARE WATCHING YOU."
Thank you to all who do follow through and contact the House Republican Caucus,
Leadership COTU