Leadership of Conservatives of the Upstate Admonish Pickens SC Delegation

Below is the speech given by Johnnelle Raines who is on the Leadership Team of Conservatives of the Upstate and VP of United States Parents Involved in Education. 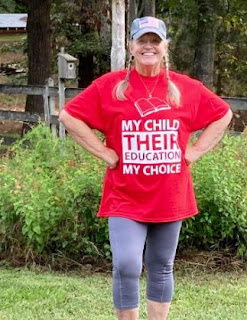 We’re feeling helpless as it seems as though we are on a sinking ship with no life jackets left.

WE NEED OUR ELECTED TO HAVE GODLY BACKBONES.

God is our ever-present help in time of need, yes, indeed…but we also elect you guys to stand in the gap to protect children and help keep us from losing our God given freedoms. Each of you is a professing Christian and it’s imperative you seek the word of God more than the words of your colleagues. Proverbs 29:25 says, “The fear of man brings a snare but he who fears the Lord will be exalted.” Seek God’s approval and not just your colleague’s approval.

There are 3 legislative bills that need to be filed asap that honor God’s love of children. We need your assurances all of you will work toward making that happen and will support them. The Defense of Children's Innocence Act, which Rep. Beach is spearheading… The SC Integrity in Education Act, and the SC Protection of Minors from Pornography and Obscenities Amendment   We also need Godly legislation that will protect unborn lives.

We need all of you to support the following: closed primaries, judicial appointment reform so trial lawyers aren’t picking who presides over their own cases, legislation protecting SC sovereignty, legislation which prevents Federal education monies that come with strings attached for liberal agendas and term limits to stop cronyism corruption.

We need verification that these Pickens Delegation meetings will continue quarterly like last year where we can still view your votes for appointments to board vacancies.

What we don't need representing us is self - absorbed, limp wristed, reach across the aisle compromisers that just want to go along to get along with democrats. We are tired of fake rhetoric. We see your voting records and that causes us to think you’re just down there feathering your own retirement nests and boosting your own egos.

I recently looked at the 2022 Freedom Index voting scores. None of you even had a passing grade!  Representatives from nearby counties Stewart Jones, Josiah Magnuson, Ashley Trantham and Ryan McCabe scored a perfect 100! And y’all couldn’t even get a passing score, that’s unacceptable. We expect you all to at least pass this legislative session year.

We see the SC House Freedom Caucus members are slowing the sinking of our ship by bringing lawsuits on Critical Race Theory being taught in our schools and by forcing a pediatric transgender clinic to shut down ... were any of you helping them?

Why is Thomas Beach the only Pickens County member of this SC Freedom Caucus?  We would think you all would want to support this ACTIVE caucus who is standing in the gap.

We want each Representative here to tell us why you aren’t a member, Davey let’s start with you…Neal?... Jerry?  Bill?

Unfortunately, Rep. Davey Hiott would not answer or Rep.Neal Collins, and then Rep. Neal Collins claimed that they "typically" don't respond to questions asked at these Delegation Meetings. However, Johnnelle reminded him they did at a previous Delegation Meeting. It seems lately it depends on WHO you are as whether or not they will answer your questions. The only response Johnnelle recieved was...we're just here to listen.  It's always been said that no answer is an answer. Remember this come election time.