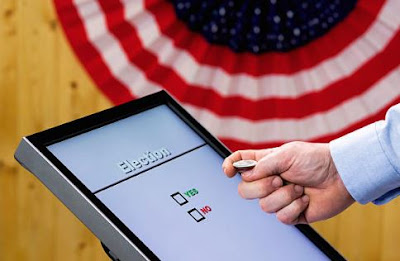 Below is a speech written by Luke Campbell, Pickens County SC elections board member which was read to the Pickens Legislative Delegation members on January 9th at their meeting in Liberty, SC:

"As of last October, I am a board member for the Pickens County Board of Registration and Elections ... and on election day last November.

I visited 9 of the 56 polling locations in a 6-hour period in Pickens County, and talked to many people and poll workers, well over 400 total.

The primary issue that almost 100% of the voters mentioned was the balloting process, and they would really like to go to “paper ballots”. On the other hand, most poll workers and elections office personnel get wide-eyed when I say, “paper ballot”, because they see increased paperwork and complete inability to count paper ballots by election evening.

People see “electronics” as problematic at best. they don’t work right, and they’re rife with possibilities for nefarious acts.

When electronic interference in elections occurs as it did, for example, when communication “MIFI” didn’t work across SC on last November election morning, voting lines increase, and polling station workloads go through the roof, and this leaves voters with a bad taste in their mouths.

These types of things cause the very widely held belief that electronics are “bad”. In addition, to the “electronics” issue, a second major issue, which I found is that most people entering the voting booth do not know many of the things which are on the ballot: Either some of the positions such as watersheds, or amendments to vote on are unknown. And if there are missing candidates on the ballot, as we had in one Pickens district, apparently only 1 out of over 800 voters apparently even knew the candidates were missing. This is not good.

As a member of the Elections Board, my purpose is to make things better, faster, easier ... and relieve as much consternation as possible. Basically, everything we do can be improved, and while perfection is impossible, I use that as my goal so that I can always improve.

Even though I would give Pickens County an “A-” in the last election, there is room for improvement. I believe that with the tools that we already have, plus a few procedural modifications, we can remove problematic issues.

I don’t call this change “paper ballots” – which may bring back thoughts of unreadable checkmarks and hanging chads, but rather, Balloting Without Electronic Interference.

I believe a modified system which uses the electronics in a voter-by-voter supervised way can not only remove voter trepidations, but also keep our poll workers and election officers sane and provide same-day results.

I would like at least one of you to start this process to modify our balloting procedures. I have a ½ page high-level list below to outline the changes necessary.

There are probably many ways to eliminate electronics interference and increase voter knowledge ... but this may be an example start.

A proposed BWEI system (without the details) would be as follows...

 the voter would find at the entrance a “review area”, with a paper sample ballot containing a list of all the candidates and articles (if any) he would be voting on. Additionally, a printed booklet would be available which would contain from each of the candidates, a maximum of 500 (?) words stating their position on various subjects. The purpose of this area would be for the voter to study in advance, if the voter has not already done so, all the candidates and articles, to relieve pressure at the actual voting machine, and have a more informed voter. If the voter does not need this, he could simply proceed.

 after a greeting, the voter would advance to the check-in and present his proof of identification ... which would be read electronically by the poll worker.

 the voter would use the electronic ballot-making machine to vote, and receive a neat, clean, tidy, and highly readable “paper ballot.”

 the voter would advance to a STOP SIGN station, review the ballot, and compare, if necessary, to a voting-list which is posted at that location, so the voter can verify and validate that the electronically printed ballot received is exactly what was voted for, and that all his candidates and article choices are on the printed ballot. The voter would proceed to an electronic machine where he would insert his ballot and it would be electronically counted and kept for future reference.

 The issue at this point is for the voter to be able to assure that the ballot was properly counted. At the end of the day, the clerk and 2 poll workers remove the ballots from the machine and run them through a second machine which is manufactured by a different vendor than the first and has no affiliation in any way with the first vendor. The votes from each machine must match identically. This process would be visible to poll watchers, and the results posted."

written by Luke Campbell, Pickens Board of Elections Member