Sometimes good intentions which are not thought out properly can go bad.

Such is the case of a situation that arose at Pickens Middle School where the administration thought they were doing something good on how to address a situation of racial tensions but ultimately did not think about the consequences of segregating students.

Shouldn't our School District of Pickens County's lawyer have been consulted about their plan?

Under the Equal Protection Clause of the 14th Amendment, Title VI of the Civil Rights Act of 1964, Discrimination on the basis of race, color, and national origin in programs and activities receiving federal financial assistance are prohibited.

Simple justice requires that public funds, to which all taxpayers of all races [colors, and national origins] contribute, not be spent in any fashion which encourages, entrenches, subsidizes or results in racial [color or national origin] discrimination.

The Principal of Pickens Middle School as well as the School Board and District Administration is now having to deal with backlash over his plan.

This whole controversial situation went viral on a Facebook page which ended up having over 1K comments. You can view those comments at this link:

Below is an email which was sent by a concerned citizen to SC Attorney General Alan Wilson which explains why there is such controversy over what was planned. But please note NOT ALL PARENTS received prior notification of the special lunch arrangements or the fact a speaker was going to address the racial tensions. Many white students weren't aware of the special lunch date with the speaker until the students of color bragged about receiving the special invitation.

It has been brought to my attention that during the week of April 11th 2022 the Pickens Middle School in Pickens, South Carolina planned and conducted a series of presentations by a guest speaker in which the school segregated students by skin color. The students were given special lunch sessions and divided into the following groups: "African-American," "Hispanic," and "Two or More Backgrounds." Students who did not fall into these categories, such as white, Asian, and others, were not invited and were excluded from these special presentations and lunch meals. This appears to be a direct violation of the Civil Rights Act of 1964 Title VI, which prohibits excluding individuals from programs or activities on the grounds of race, color, or national origin by entities receiving Federal financial assistance.

According to letters and emails from the school Principal, Mr. James King, the segregation of students by race was intentional to allow the guest speaker, Ms. Adrienne Young, "a chance to talk with students about how to cope with being a student in a predominantly white school." Setting aside how this is highly inappropriate and just plain racist, a glaring irony must have eluded the school’s leadership and the guest speaker in that the subject of her talk was "unity at schools."

Please see the attached email and letter received by the school’s parents indicating specific lunch times their students were assigned: 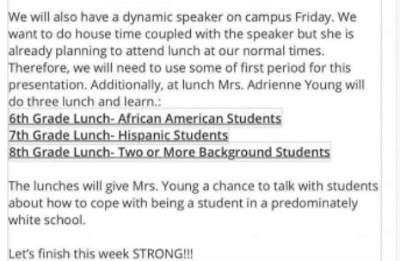 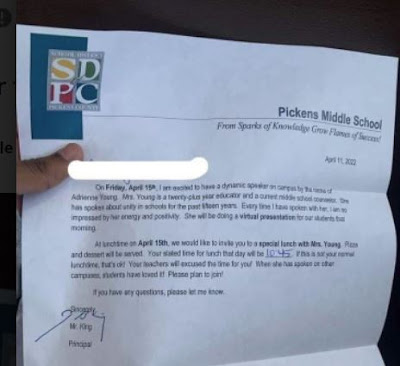 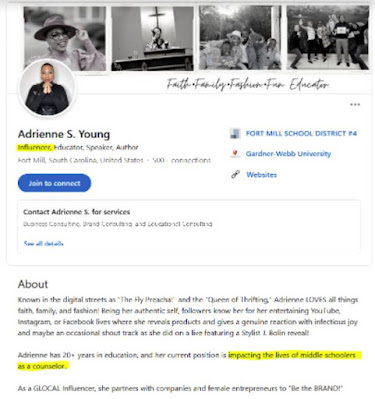 The “dynamic speaker,” Ms. Young, is a counselor at Banks Trail Middle School in Fort Mill and describes herself on her LinkedIn account as an “influencer…impacting the lives of middle schoolers.” Is segregating and excluding students by race and teaching them how to “cope with” white students the kind of influence and impact the SC Department of Education is advancing?  Ms. Spearman (copied here), as the Superintendent of Education, would you kindly provide a response with your position on this? Would you also please reconcile how such presentations Ms. Young is conducting fits with your statements that Critical Race Theory is not taught in SC schools?

Mr. Wilson, would you please review and investigate this incident, as well as similar presentations given by Ms. Young at other school campuses as alluded to by Mr. King in his letter, and pursue all appropriate legal action as it merits under the Equal Protection Clause of the 14th Amendment, Title VI of the Civil Rights Act of 1964 and specifically regulation 34 C.F.R. §§ I00.3(a), I00.3(b)(l), and nondiscriminatory statutes of the SC Human Affairs Law? For reference, I am attaching a determination issued by the US Department of Education Office for Civil Rights in a similar case where a school segregated students and staff by race into “affinity groups” during race trainings and programs. The parents and students of Pickens Middle School are -- quite justifiably – very upset with this and would have legal standing in court.

Thank you for your attention to this matter. I’m looking forward to hearing from you.

For your information, the video of Adrienne Young's speech she prepared has since been removed and no longer available for parents or taxpayers to view. 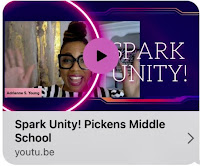 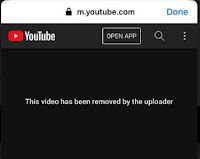 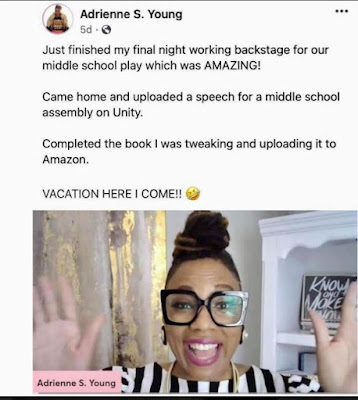 Luckily, several of our Conservatives of the Upstate members were able to view the video before it was taken down. The ones who watched were shocked when she took the opportunity to express her personal political view of "loving" Rep. Alexandra Orcasio-Cortez" who is well known for her love of Socialism and wanting to transform our Constitutional Republic.
Speakers who are hired to have influence and inspire young students whose minds are very malleable during the middle school years should not project their personal political leanings one way or the other.
It will be interesting to see just how many parents show up at the next School District of Pickens County's Board meeting who are concerned about the choices this Principal at Pickens Middle School made, especially not alerting ALL parents to his plan ahead of time.

If you wish to attend and make your concerns known during public forum time, the next School Board Meeting of Pickens County is Thursday, April 28th beginning at 5:15 PM.
The meeting takes place in the Board Room located at 1348 Griffin Mill Road, Easley, SC, 29640.
For more information about this SDPC Board meeting you can call:
Rosanne Morris at 864-397-1029 or by email at rosannemorris@pickens.k12.sc.us