Is Our Tax Supported Library In Pickens County Pushing An Agenda? 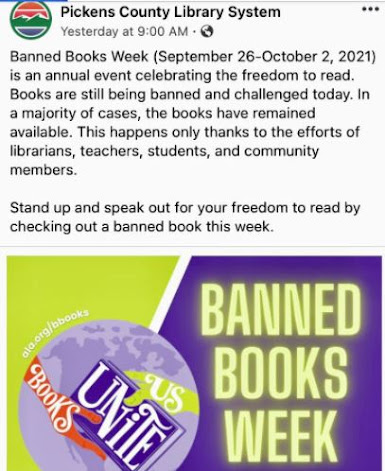 Banning books or movies from our Library and promoting and pushing people to come view them are two entirely different issues.
The present appointed 6 person Library Board and their Chairman Dennis Latham have absolutely no say so over which movies or books the Library Director, Stephanie Howard, decides to promote and push or the banned books that she and her staff decide to promote or push for citizens to read.
To be clear, these decisions at present are at the sole decision of Library Director Stephanie Howard and her staff who are payed by YOUR tax dollars.
Conservatives of the Upstate think this needs to change. She needs oversight into her decisions. Isn't that the job of the appointed Board of Trustees?
Who appoints these board members you may ask. The answer is our County Council, and they are at present accepting applications for citizens to serve on this board. There are 2 upcoming vacancies.  See this link: https://www.co.pickens.sc.us/government/county_council/boards___commissions.php
Someone on the Library of Board of Trustees needs to make a motion that going forward all media and reservation space for meetings being promoted and sponsored at the library needs to be pre-approved by a majority vote of the Library Board of Trustees.
Also, let it be also known that the Library Board Chairman Dennis Latham has not responded to two of  COTU's Leadership Team member, Johnnelle Raines' emails about what effect the 344 signed petitions against showing questionable violent, sex filled R rated movies had on any discussions at their last Board of Trustees meeting held on September 16 at the Pickens Village Library Branch.
We are not the only community that questions what their tax supported libraries are doing. Please take the time to read this article.
https://county17.com/2021/09/21/commissioner-teacher-raise-concerns-regarding-books-at-library/
After listening to the Library Director recently pitch to the Pickens County Council spending taxpayer money on expanding the Library for building more meeting space, none of the county councilmen even asked for a list of groups they have had to turn down. Wouldn't that data be important to know?
We here at COTU think that choosing "appropriate" media to sponsor and push for citizens to read or watch or participate in is imperative for reflecting our community's values.  What we have observed lately is that our tax supported library Director Stephanie Howard wants the community to come watch and read media that do not reflect our community needs.
What kind of content will the library director allow going forward if they do indeed build these expansion meeting rooms?
Are the meeting rooms going to be allowed to hold Drag Queen Story Hours? How about Satanic group meetings? Witchcraft meetings?  LGBTQ + meetings to educate our youth on sex change operations? Or maybe a Man/ Boy Love Group to discuss the book Lawn Boy? (see this video on that book)
https://youtu.be/CfczBL3-wMw
Citizens, we sure hope you understand the fact that it’s not as simple as some think, when they say things like this:
"You don’t like it, then just don’t go.” Or "If you don’t want to read it, don’t read it."
As stated before, having books and movies available for people to choose of their own free will to check out and view in the privacy of their own home is a totally different issue than the Library becoming the sponsor and pusher of immorality.
COTU indeed believes in freedom and our first amendment. But our tax dollars should not be pushing or sponsoring evil.
Shouldn't our tax supported Library reflect the morality and values of the community they serve?  Has our community now become fine with evil agendas?  Having banned books or R rated movies on the shelf is indeed Freedom… but sponsoring and pushing citizens to choose them is immoral.
Our tax supported library is here to serve our appropriate educational needs. It should not be pushing a questionable or controversial agenda. The library should not be funded by our mandated tax dollars to promote the liberal American Library Associations political agenda of corrupting our community with filth.
Let's all remember that one of the goals of Marxism is to destroy Godly family values. Let’s not aid and abet that through our tax supported library please.
The next Library Board Meeting  which allows public comment is to be held on November 18th at 6pm, 105 Commons Way, Central, SC at the Central-Clemson Library
Here is Stephanie Howard, Library Director's email: showard@pcls.fyi
Here is Dennis Latham, the Library Chairman's email: dennislatham@gmail.com
Here is how to get in contact with our County Council via email: https://www.co.pickens.sc.us/government/county_council/index.php