Is Al Jazeera a news source being used in Pickens County Schools?

We are a chapter group under the wing of United States Parents Involved In Education which can be viewed here: www.uspie.org

The parent who wishes to remain anonymous was concerned about a lesson her 9th grader was exposed to at River Bluff High in Lexington County District 1. The lesson Involved “Newsela,” According to PJ Media article by Ashley Thorne, “ Many public schools are now assigning their students children’s versions of newspaper articles through a new company called Newsela. Newsela takes articles from outlets such as Washington Post and Associated Press, rewrites each one to fit five reading levels, and publishes them online.” See more about Newsela here:

This particular lesson her child was given was from the news source Al Jazeera.

The parent wrote to us saying,

Here are the photos of the lesson her son’s English teacher used. 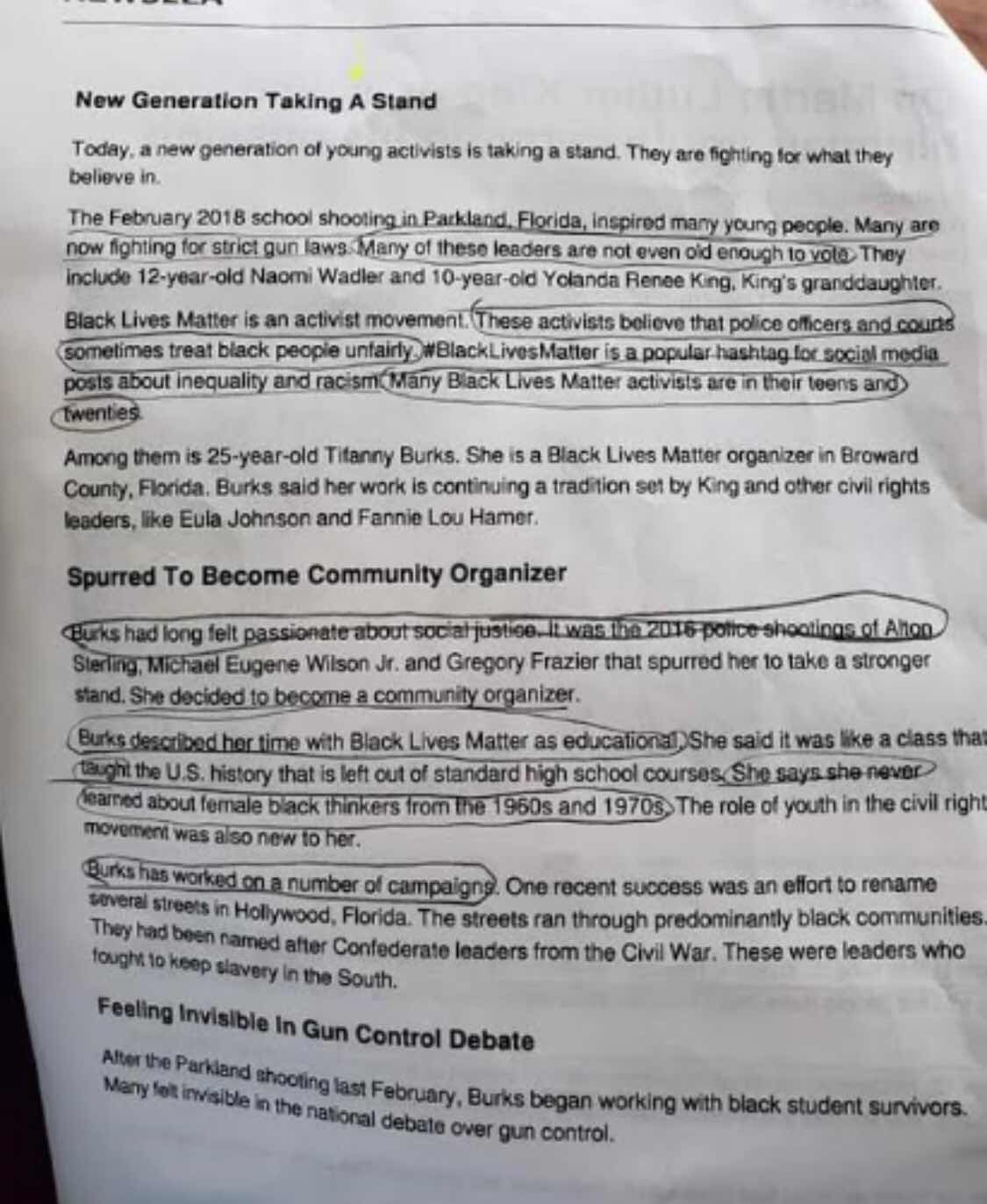 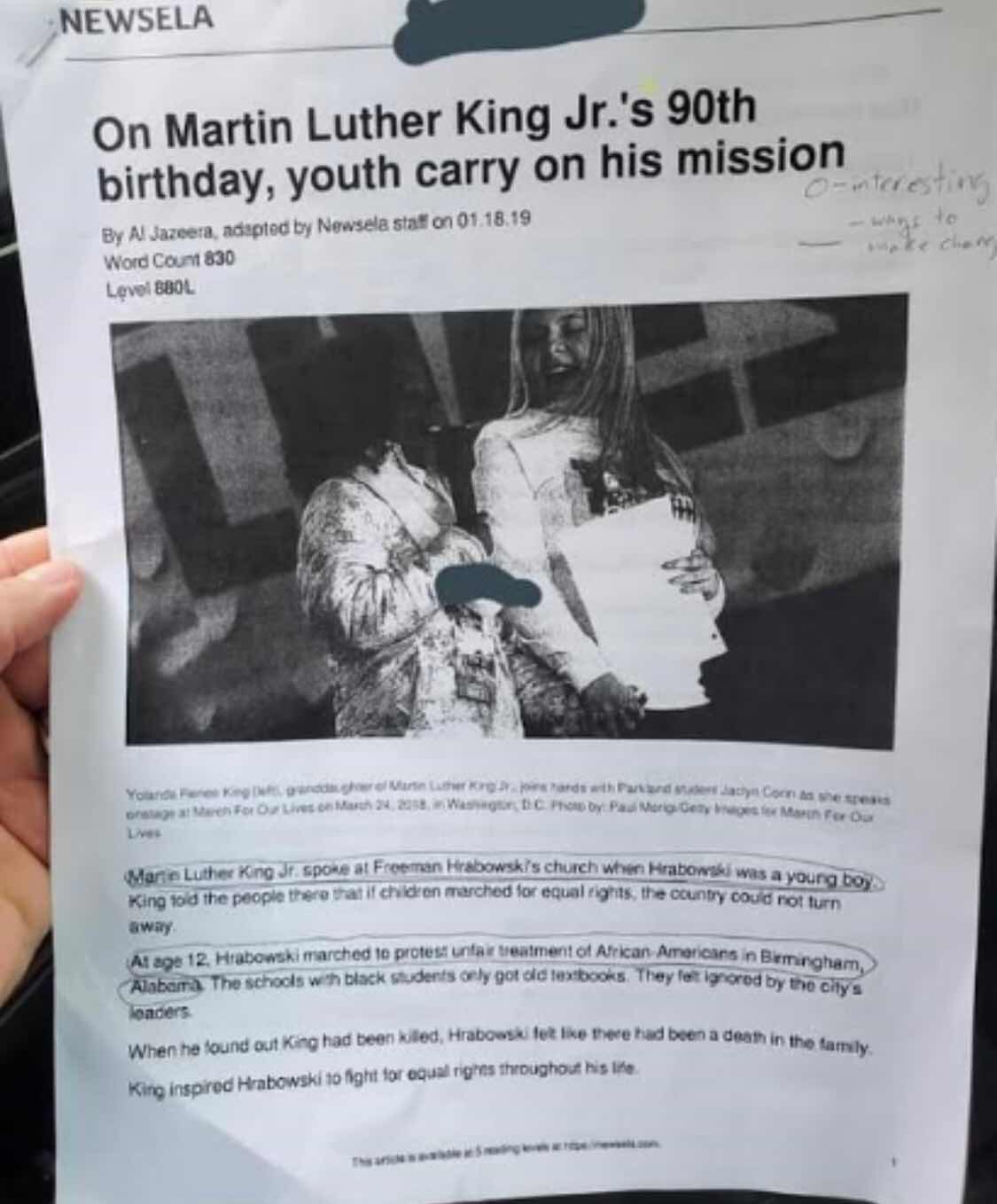 After doing some research of my own, it seems that the founder and CEO of Newsela is Matthew Gross. His company now serves 20 million users and almost all public schools are engaged. Please see their latest update here:

One of my good friends from New York told me that CEO Matthew Gross was Executive Director of the Regents Research Fund, a privately funded affiliate of the New York State Board of Regents and Education Department that helped lead the implementation of Race to the Top–driven education reforms. He reported to Education Commissioner John King, Jr. Matthew oversaw the organization’s growth strategy, public–private partnerships, talent acquisition, and day-to-day operations. While at the Regents Research Fund, Matthew led the development of EngageNY.org, a web application providing teachers and administrators with resources for implementation of Common Core state standards and teacher and principal evaluations. Since its August 2011 launch, the site has been viewed over fourteen million times by educators in all fifty states.

Newsela's CEO being a pusher of Common Core Standards doesn’t boost my confidence level in his company or give me a warm. fuzzy feeling about it being fair and balanced news.

A huge concern for parents should be exactly what is the true goal of this type of “news” information being used in our public schools? Are teacher’s being used as tools to indoctrinate students with only hearing left leaning news reports? Is this Newsela Company phishing for student data? After you review...do you think this is biased news or as President Donald Trump would say, "fake news."

I found a conversation about Newsela from another concerned mom who wrote:

“I talked to our 6th grade teachers (Catholic school) in depth about Newsela at the beginning of the school year. I an not a fan. You can get on and just look at the story (news 😂) titles. When I did that, there was a story about a transgender child (who was still physically the birth gender but identified the other) who had started hormones and was going to prom never having told his/her parents. Concerning on so many levels. Advocating "do what feels good", "ok to disrespect parents by going behind their backs", not to mention if families feel that content is appropriate for their child to read.”

So it looks like even private schools are using Newsela.

Is your child’s school using Newsela? You should ask if you have concerns.

Here is Newsela's web page. Maybe you should check it out and see what your child is reading unbeknownst to you when they go online and don’t bring home the lesson.

If you find you are concerned like this parent was. You should contact your local school district board members with your concerns as well as contacting Superintendent Molly Spearman. SCSuptED@ed.sc.gov

And as an added bonus... try contacting your STATE school board member here: https://ed.sc.gov/state-board/state-board-of-education/additional-resources/state-board-members-information-and-biographies/

Reporter for The Standard and