Is Your Child's Teacher a Liberal Agenda Advocate?

The news lately has been covering public teacher strikes and their demands. We also have seen the National Teacher's Association as well as the American Federation of Teachers have their chapters in each state rallying the liberal ideology agenda. See this recent article:
https://townhall.com/tipsheet/briannaheldt/2018/08/06/american-federation-of-teachers-president-were-becoming-more-political-n2507335
Recently here in South Carolina a 17 year veteran of teaching, Jed Dearybury posted a tweet on July 20, 2019 that really got people talking on social media. Here is his tweet:
“New teachers, I'm sorry if we veteran educators have misguided you about the profession. It's not about cute classrooms & trendy ideas. It's political. It's advocacy. It's the front line of battle for the future of our nation. Go no further if you're not ready. #TeachSC.”
This teacher has won plenty of accolades such as GQ Magazines' Male Leader of the Year, and finished in the top 5 for Teacher of the Year in SC, as well as winning an award from President Obama for Excellence in Math and Science Teaching, The SC Dept of Ed released a glowing report on Mr. Dearbury which can be viewed here:
https://ed.sc.gov/newsroom/news-releases/jed-dearybury-of-spartanburg-south-carolina-named-2016-lowell-milken-center-fellow/
The controversy we are facing as a nation is the question, Should Public School Educators be using their role as teachers in classrooms as political advocates? We took a recent poll on Facebook and distributed to several group pages asking, “Should teachers in tax supported public schools discuss their personal ideology in their classrooms with their students? The results with 195 responses so far has shown 97% believe NO, a teacher should not be sharing their personal political beliefs.
Is it possible for a teacher who is a strong liberal activist for Social Justice keep their ideology from bleeding over into the classroom? An article in The Huffington Post stated that Mr. Dearybury left the classroom and changed jobs because he feared overstepping, he didn't leave due to frustration with his district or state or federal mandates. The article can be viewed here:
https://ed.sc.gov/newsroom/news-releases/jed-dearybury-of-spartanburg-south-carolina-named-2016-lowell-milken-center-fellow/
Dearybury has left the classroom and now is involved in teaching teachers via professional development to over 100 SC schools. One has to wonder if his liberal activism is absorbed by the teachers he teaches.
It is clear we all need to be concerned about teachers “overstepping” with politics in their classrooms and allowing their activism to bleed over into their classrooms. Teachers are looked up to as a source of truth from children. Teachers should not be playing politics with children.
What can be done to stop our public tax supported schools from choosing sides in the liberal vs conservative political battles? How can we prevent teachers from playing politics with your child?
Written by Johnnelle Raines
Board Member United States Parents Involved in Education 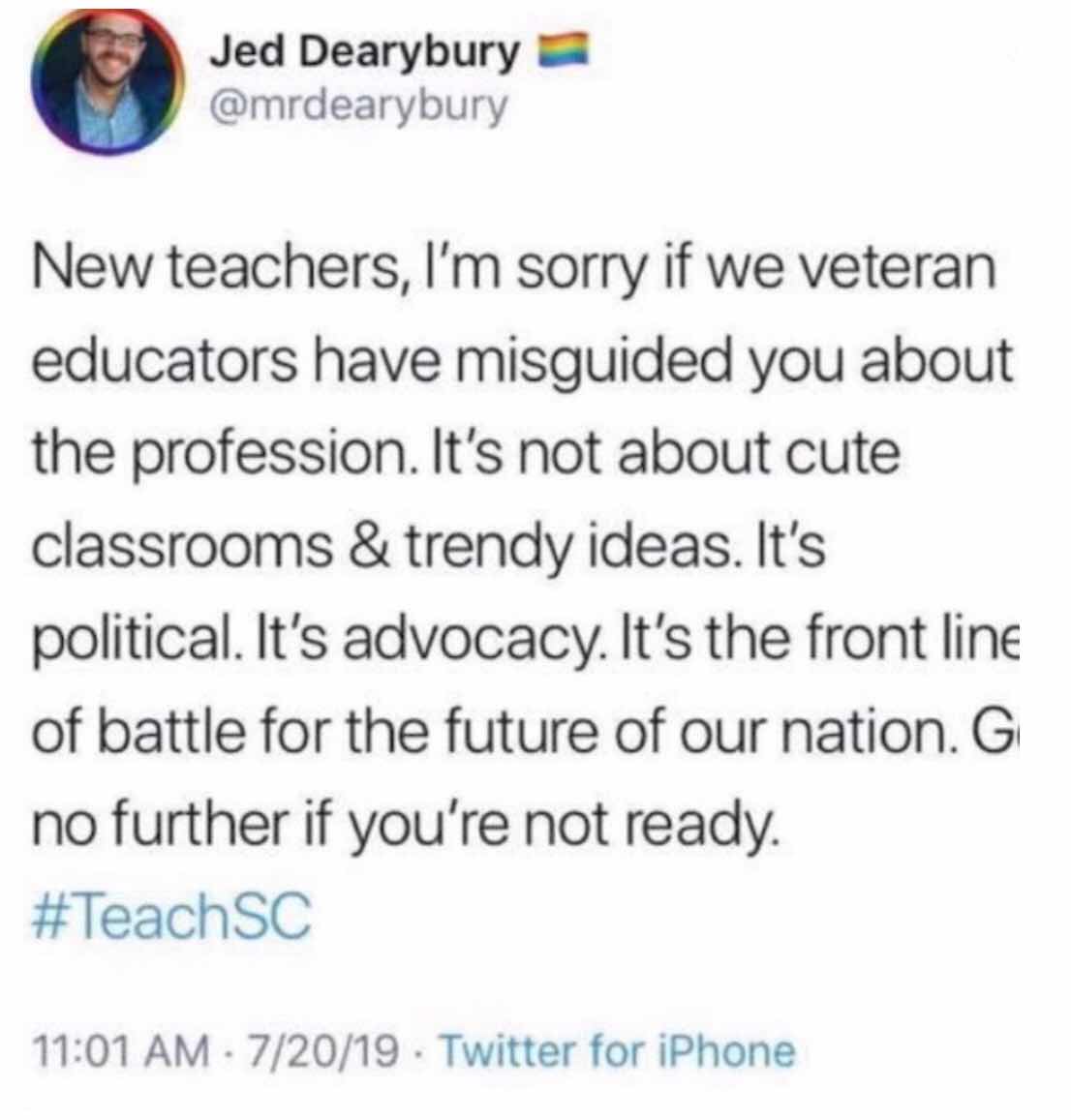