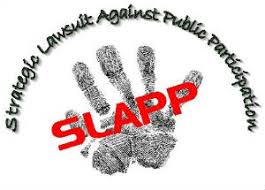 Anti-SLAPP laws (Strategic Lawsuit Against Public Participation) shield citizens from bogus lawsuits clearly intended to silence criticism. This lack of protection has resulted in a number of merit-less lawsuits being filed. One of the most ridiculous -- a former university program head suing his replacement for things a journalist said -- managed to make its way all the way up to the state's appeal court. In the end, the defendant was awarded $10,000 in legal fees, but none of that was guaranteed when the plaintiff started wasting everyone's time and money.
As the law stands now in Tennessee, only communications to public officials about public entities are shielded from defamation lawsuits. It doesn't cover things like negative reviews of businesses, criticism of any public figure, or -- like the case above -- things defendants never actually said.
The new law would actually function like an anti-SLAPP law should. It would halt discovery until a ruling on the anti-SLAPP motion and allow the prevailing party to recover fees.

The bill passed both the state House and Senate, with the Senate sending a message with a decisive 33-0 vote in favor of the bill. If this passes, Tennessee will join the small minority of states willing to protect their residents from frivolous lawsuits filed solely to shut them u