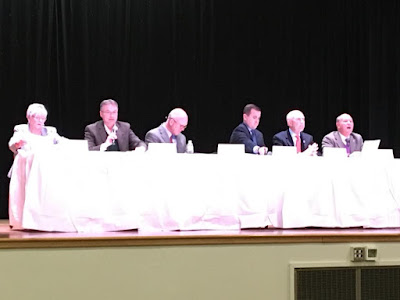 Sarai Bautista talked about her DACA status. She has lived in Easley since she was 11 years old and she graduated from Easley High School in 2009. She has been in college since 2014, but having to pay out of state tuition costs has made it harder for her to attend school. She is also not eligible for SC Education Lottery scholarship funds. After attending nine classes (I think it is a nursing program.) she found out she cannot be licensed. She asked the delegation to support Neal Collins bill, H. 4435, the "South Carolina Dreamers Act of 2018." Collins took a photo of Ms. Bautista as she was speaking.


Ashley Case, judge candidate for the 8th Circuit Family Court introduced herself to the delegation. As she talked about her qualifications she commended Guardian Ad Litem for their work that she has seen first hand in the courts.


Richard Byrd spoke as someone who spent 30 years as teacher. He said he agreed with some of the points made by Johnnelle Raines and also disagreed with some of her comments. He questioned why education is underfunded, contrary to state law. He discussed teacher pensions and teacher pay, citing his own experiences. Mr. Byrd asked why there have been no more details on the security breach that exposed personal information of SC taxpayers. He spoke about voting machines, preferring a paper trail to electronic records. There was a request to expand Medicaid in South Carolina. As he closed his well organized list of topics he said that tax cuts do not solve every problem.

Larry Oberstar approached the lectern and asked the delegation to allow him a moment to say the pledge to the South Carolina flag. His wants South Carolina to become a sanctuary state for the unborn.


Steve Haynie. Spoke about the Local Government Fund. For the past four years I made a request for full funding. Every year that gets ignored. This time I made the case using real numbers provided by the county, pointing out that $1.8 million of county taxes went to pay for functions of State government for which taxpayers already paid state taxes. From there I was able to point out county level needs and how the LGF shortage hinders the County Council’s efforts to bring jobs to Pickens County. I warned that if the LGF funding formula is lessened to make it easier for the state to meet its funding requirements, the county is still stuck with the same bill. After that I got in the question suggested by Bob McLain, “Will you consider putting a sunset on the new gas tax?” Expanding on that I made the point that if we do not see any results in repairing Upstate roads then we need to drop the new tax and try something else. The Delegation did not like that, especially Collins. I ended by requesting the Legislature pass a resolution in either the House or Senate. I want a resolution declaring Steve Haynie of Easley to be the most handsome man in South Carolina. The Delegation laughed. The timer went off. I got it all in within three minutes.

Chairman Hiott asked if anyone else wished to address the Delegation. I looked back and saw Elliott Kelley who had arrived late because of heavy traffic in Greenville. He was able to present a request on behalf of the GOP. The SC GOP passed a resolution which is the basis of bill H. 4418 which had been prefiled by Representative Alan Clemmons. The bill would allow voters the voluntary option of showing political party affiliation, but it would not be a requirement.


At 6:20 PM Chairman Hiott offered a last chance for anyone wishing to speak to anyone present. No one chose to add their comments. Chairman Hiott thanked the Sheriff’s Department for being present and the meeting was adjourned.


Notes: Per pupil funding is not fully funded according to law. The Legislature did increase the amount paid per student, but also increased the amount of money school districts must pay into the state retirement system. That resulted in a net loss for our school district, and was used as the reason for one of our last tax increase. Re Joshua Putnam was not present