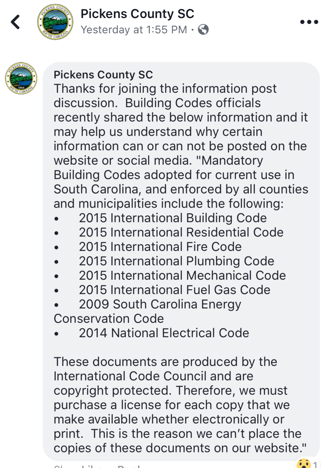 Yet another way that Agenda 21 affects taxpayers - not subject to FOIA because of some ridiculous copyright claim.

The government CANNOT under any circumstances copyright a document- but these Non Governmental Organizations (NGOs) can.

The main problem with the claim in this screenshot is though, no one was asking for any of the documents listed - only the affected document specifically as it relates to Pickens County. 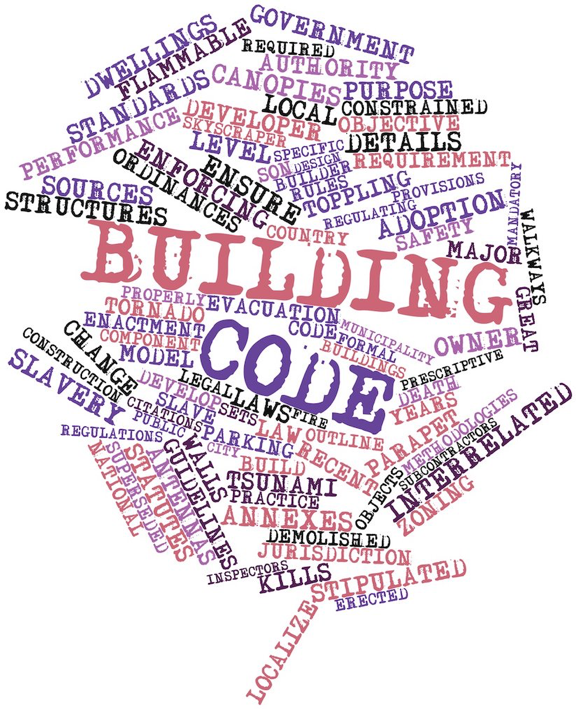 Conservatives Of The Upstate members share these concerns with the updated building codes ordinance that is before the Pickens County Council ...
1. What special interest or special individual made the request for these changes?
2. How do these “new updates” vary from SC State regulations and are they compliant to state codes?
3. Not siding with a landlord, tenant, occupant or owner, the process of private property matters is supposed to be arduous and follow a strict judicial procedure to prevent abuse and ease of breaking contracts between business associates or reasonable covenants between family, friends or neighbors. This new process seems to put a lot of arbitrary power into “an enforcement official” and the hands of any politician that may want to harass disagreeable taxpayers.
4. There seems to be a slight insertion of Comprehensive Plan actions in this new update - something Council has promised taxpayers would no longer be considered except to comply with a loose resubmission WITHOUT changes at Census time intervals. The “new updates” have an Agenda 21 feel to them - taking power away from accountable judges or due process and putting the process into the hands of a paper trail - decentralized and difficult to decipher.
*You may leave a comment on this post with your email address and a copy of the new ordinance can be emailed to you. Your email address will not be published nor kept or shared for any purpose other than the transmission of this document.
No comments:

PUBLIC COMMENT FOR PROPOSED BUILDING CODES ORDINANCE
Tuesday, November 28, 2017 @ 6:30 PM
Pickens County Administration Building Auditorium
222 McDaniel Ave.
Pickens, SC 29671
Members of the public are invited to attend and provide input on the proposed Building Codes Ordinance on Tuesday, November 28, 2017 at 6:30PM
Building code officials will be available for questions on Tuesday from 8:00-4:30 p.m., at the Administration Building or by phone at (864) 898-5950.
The proposed Ordinance will have a separate official public hearing before the third reading.
No comments:

For your enrichment & understanding... 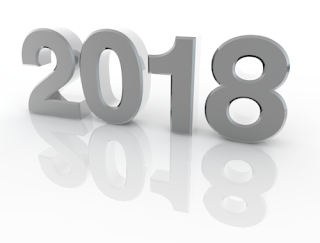 The S.C. Policy Council has put together a list of ideals and points that are crucial to understanding where South Carolinians need to be focused in 2018 ...


In South Carolina private property can be seized by a practice known as “eminent domain.” State law allows government to take private land for “public use”: for example, to build a road or government building. But the state constitution doesn’t define “public use,” which means government could ostensibly take land for almost any reason at all. Further, a state constitutional provision permits seizure under eminent domain if the property is “blighted” – in which case the land could be applied to private use. The General Assembly introduced legislation in both 2015 and 2016 that would have given eminent domain powers to a private company – an unprecedented step with enormous potential for abuse.

The past several years have seen an increasing number of similarly framed bills empowering the state to seize the property of private citizens in the name of rehabilitating run-down buildings. In these bills, typically, the owner of the property would be billed for the repairs or be forced to sell it. Absent in this legislation is any assumption that the owner of property has a right to it. The governor vetoed one such bill that passed in the 2017 session, although the General Assembly may override that veto when they reconvene in January.

Many other topics are covered ... 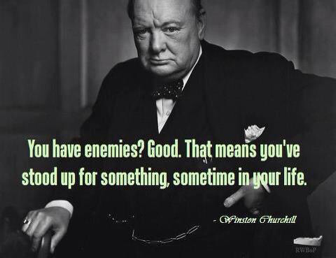 I have been getting a lot of calls, messages, emails, and notes asking about specifics on the tax reform bill. I thought it might be helpful to answer a few of the frequently asked questions I have been getting:

Q: Is this closing loopholes?
A: Yes. This legislation is closing dozens of complex loopholes for special interests.

Q: What’s happening with the mortgage interest deduction?
A: If you currently hold a mortgage, your deduction will not be changed.  Starting next year, under this legislation, your deduction on any new mortgage will be capped to the interest that applies to the first $500,000 of your mortgage debt. In 2016, the average amount of mortgage debt was $156,150 in South Carolina.

Q: What’s happening with the state and local tax deduction?
A: Low-tax areas like ours subsidize high-tax areas like New York, Boston, Washington DC, and San Francisco. Under this legislation, we are cutting rates across the board and eliminating that deduction – which will stop South Carolina from subsidizing Manhattan’s high taxes. Check out this map to see a county-by-county breakdown: https://static.taxfoundation.org/state-local-deductions-2014/index.html

Q: Is this tax reform retroactive?  Will it sunset like the Bush tax cuts did, setting up some future cliff?
A: No. This is permanent reform that would take effect with the 2018 Tax Year.

Q: What about charitable contributions?
A: There are some technical changes on making sure that cash donations get receipts but the deduction will stand.  We believe it’s more important that private and non-profit institutions help people than having the federal government do it. Regular people know how to help other people far more effectively than bureaucrats do.

Q: What about education?
A: This reform keeps and consolidates education tax credits, expanding 529s to cover elementary and secondary education, and allowing 529s to be created for as-yet-unborn children. It also allows credits for tuition which will save college parents thousands every year.

Q: Why do away with exemptions?
A: To simplify the system. To make up for this, the standard deduction is being doubled and indexed to inflation, the lowest bracket (of 12%) is being expanded to the first $90,000 of income, and the child tax credit is increased to $1,600. For most families, that’s going to result in an overall savings of around $1,280/year.

Q: What about Obamacare taxes?
A: I would love to get rid of those, in this bill or any other.  The decision (for now) seems to be to avoid complicating this bill with the Obamacare tax issues, but handling those in a health care specific bill. I’ve asked our Leadership to specifically kill the medical device tax, the health insurance tax, and the net investment tax, but so far that’s not being included in this discussion.

Q: Why can’t you go to just a Flat Tax/Fair Tax approach?
A: I am a cosponsor of H.R. 25, the Fair Tax Act of 2017, and I am a supporter of both Fair Tax and Flat Tax approaches. However, there weren’t enough cosponsors on H.R. 25 for it to be part of the discussion. The more deductions we can eliminate, the better off we will be to ensure a fairer and flatter system for all Americans.
No comments: 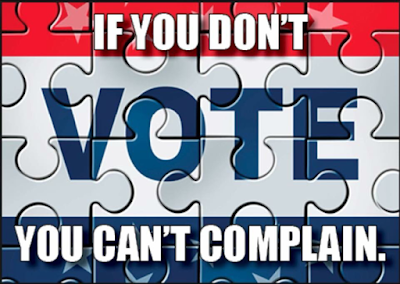