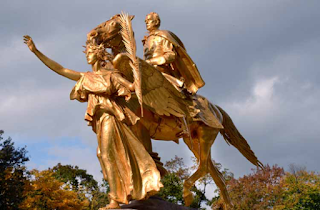 For every Confederate monument that comes down, so does a Union monument.

New York City spent nearly $1 million in 2010, refurbishing a CONFIRMED arsonist and rapist's statue. William Tecumseh Sherman ordered his troops to burn Atlanta, shoot women and children, and "have their way" with them.

General George Armstrong Custer is quoted for saying, "The target practice on the Southerner will assist me greatly  when, after the war, we move to rid this land of the blight of the savage red man."

^ Sure, interpret the treatment of the black man how you like. Slavery was not a proud moment in history, but by removing Confederate general statues and not Union statutes what are we saying? Honor the arsonists, rapists and homicidal maniacs. Don't honor the people who owned slaves.

[Lest we fight, and win] the history of this heroic struggle will be written by the enemy; that our youth will be trained by Northern school teachers; will learn from Northern school books their version of the war; will be impressed by all the influences of history and education to regard our gallant dead as traitors, our maimed veterans as fit objects for derision."