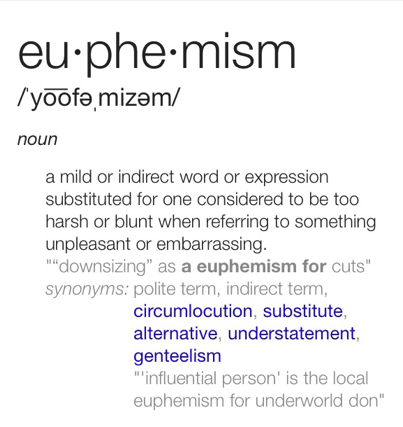 Liberalism depends for its survival on euphemisms. I believe that one reason liberals are such sticklers for politically-correct language is that if everyone went around speaking plainly and bluntly, nobody would ever vote for liberals. For instance, how much support would “common sense gun control” have if it were instead called by the more accurate term, “disarming only law-abiding citizens”? Who would vote for a “proudly pro-choice” politician if he instead had to say, “I support dismembering and killing babies in the womb”? Would terms like “safe space” and “trigger words” be so popular if they were called “stamping out free speech”?

What are the chances some of our liberal officials who make such impassioned speeches about their “sanctuary cities” would get reelected if they had to tell their constituents what they were really doing, in plain English?

Thanks to President Trump’s order that refusals to cooperate with federal immigration authorities be made public, the latest report for just one week in early February shows that 65 criminal illegal immigrants who should have been turned over to ICE for deportation were instead turned loose in “sanctuary cities.” The leader in criminal releases was New York (14), followed by New Mexico (12) and California (11). Some of the crimes that earned them deportation orders: “assault, battery, sexual assault, robbery, DUI, contributing to the delinquency of a minor, domestic violence, weapons charges and the sale or possession of drugs.” And that’s what being a “sanctuary city” really means, Charlie Brown: that people who do that type of stuff and were in police custody under deportation court orders were deliberately released back onto the streets of your town to target you and your family.
Oh, one other liberal policy euphemism: they oppose Trump’s order to release this information, claiming it “stigmatizes immigrants.” That is much smarter politically than saying, “We oppose telling the public the truth about our insane criminal release policies.”

Email ThisBlogThis!Share to TwitterShare to FacebookShare to Pinterest
TAGS: liberals