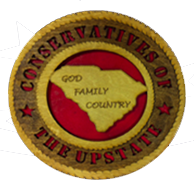 I just received my agenda for the County Council meeting Monday night.  Item #12 Second reading of Ordinance no. 526 Establishing conditions  and procedures for the declaration of a state of emergency within Pickens County and for the operation of County Government subsequent thereto or how to legally take $45 million dollars from the people of Pickens County.

This was the whole purpose for COTU meeting with County Attorney, Ken Roper.

In other words, the County is making all this over-collection legal by telling you exactly what they are going to spend the money on after the fact, and even naming the amount that they have taken from the people.  Some of the things they have not considered is that they have already by vote committed the money to a county jail for which they are using "a letter from the state" to justify.  They have no money left, but they probably will clean up the budget and put this ordinance in so they can collect more money from the people.(another $23 million)

When this comes up, we need to object as the amount is excessive and has already been partly spent on other things.  In fact, they spent $160,000+ of the over-collection in last years budget because they spent too much.

This is what many thieves call "covering your tracks"