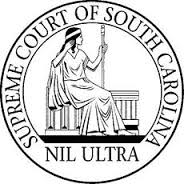 As reported by The Nerve:

Judicial Reform: Appearance of Impropriety
Every year when the South Carolina Legislature goes back into session, there’s a number of things that always happen; the calls for Judicial Reform being among them. Each year, many activists as well as those who feel they’ve been screwed over by the judicial system begin screaming for reform only to be largely ignored.  Who can blame them for trying when no other state selects judges the way South Carolina does?
Read more:
http://www.premiumnewsnetwork.com/judicial-reform-appearance-impropriety