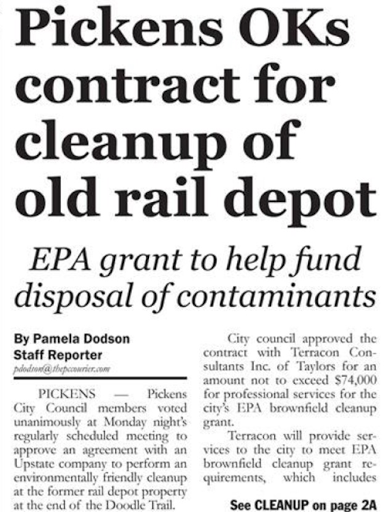 The Conservatives of the Upstate tried our best to warn the cities of Easley and Pickens about the potential PCB and other contamination hazard along the "Doodle Trail". We furnished a witness that said he knew for a fact that the railroad dumped barrels of liquids all along the railroad. The STB and DHEC were aware of our findings and did not even interview our witness. A fifty two page report by the EPA was prior issued forbidding the use of one property (Welborn property) forever and it was to be fenced and gated. This property fronts on the trail. It was also observed that barrels of contaminates were about to be disposed of by burying them. Of note -  the barrels came up missing. About that time barrels containing contaminates were dumped in the Spartanburg, SC drainage system.

It was also noted by the Conservatives of the Upstate that the sand blasting of train cars had left contaminates in the soil at the railroad station. Someone dug a ditch and washed that blasted material on to the streets of Pickens.

Now the city of Pickens is paying thousands of dollars of the taxpayer's money to clean up the station, but has taken no action on the PCB problem.

The cities of Easley and Pickens say they have run their "own study" and found nothing even after the 52 page report condemning some of the property. The cleanup of the station comes too late to avoid poisoning a child's system had they fallen or put their hands in their mouth,etc. as this contamination was reported years ago.

Our County Council has received much criticism for not supporting the taking of this property and the refusal to be involved with the trail when there was so much evidence of the problems and the fact that the property was taken without compensation to the property owners. Now we know that it was a wise decision by the County Council. Yet some of the newly elected Council members continue to be in favor of this trail.

Junius Smith
Conservaties of the Upstate