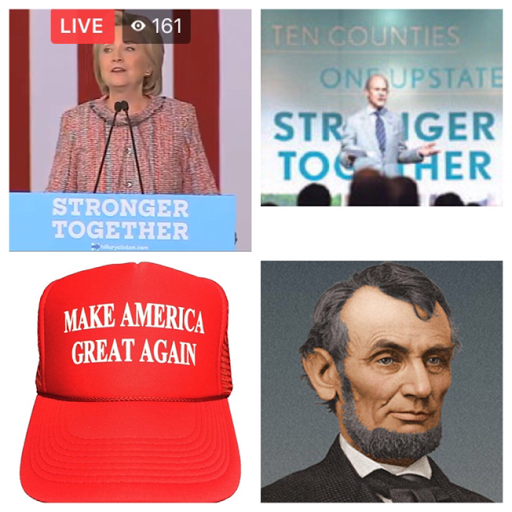 Can we glean any insight into the U.S. Presidential candidates just by their campaign slogans?

Let's take a closer look at the slogan choices of each campaign.

Former First Lady, turned U.S. Senator and U.S. Secretary of State Hillary Clinton has the campaign slogan of "Stronger Together." At first glance this seems like a simple statement of uniting the American people under a cause of freedom, but it's one of the most carefully chosen and coded slogans in the history of U.S. Presidential campaigns.

While some political candidates place their name and office on their signs and advertisements and others put a few virtues they hold dear like "transparency" or "fiscal responsibility" - democrats tend to make nebulous statements to be all inclusive - offending no one. Statements in campaigns like "transparency" and "fiscal responsibility" may imply other candidates or even potential supporters may be involved in impropriety because the current office holders lack these qualities.

Clinton chose these buzzwords carefully. Opinions and punditry aside; Clinton is a globalist. She freely admits this. What is a globalist? According to Webster's Dictionary; 'a person who advocates the interpretation or planning of economic and foreign policy in relation to events and developments throughout the world'. In other words, "united power" - but more importantly - decentralized non-representative power.

The words "Stronger Together" couldn't possibly be any more poignant to a global government.

I personally prefer as local and as personal of a government as possible. I like to know that if I alone face an issue; I could speak with someone that I consider a neighbor that has the power to address that issue and explain to me in detail whether or not they will champion me.

Hillary Clinton is a strong believer in a United Nations maxim known as "Agenda 21." While many start thinking of tin foil hats and right wing nut job conspiracies when "Agenda 21" is mentioned - it is a real piece of terminology and being strongly enforced by The United Nations on its member nations.

Agenda 21 calls for the formation of non elected government bodies specifically termed as "NGOs" (Non Governmental Organizations) to create policy and influence spending. One of the world's largest NGOs is The Clinton Foundation.

Recently, an NGO that is strong on regionalization and decentralized, non representative government by the name of "Ten At The Top" met in Greenville SC. This group, comprising of the 10 counties in Upstate South Carolina, claims to be apolitical in all aspects. If that were true, then why use the exact same campaign slogan as the Clinton campaign?  (See picture)

Donald Trump's campaign slogan is "Make America Great Again". The slogan stemmed from something he said during a press conference before a debate. He began to repeat it. It resonated with Americans who know that just as recently as the four decades of the 60s through the 90s were great - with bumps - but always a recovery. It now seems like America is in a stagnant holding pattern - with no growth or prosperity in sight - mostly due to the overwhelming national debt, non-vetted immigration, and uncontrolled spending in government. Donald Trump's wealth grew because government seemed in check with the American people. Protests saw change for the better rather than protests being a business model to better the elite's purses. Radical social change has taken place of our country's moral responsibilities.

Trump decided that a baseball cap with his slogan embodied the American people. And, like him or not - he obtained more primary votes than any candidate in history.

In my lifetime, I've never witnessed a stronger political movement than Trump's. His campaign of "we can have it back" resonates with taxpayers and citizen's rights advocates. I've had many say to me, "He says what I wish I could say." And again, like it or not, you have to admit you've wanted to turn to a person and just call them "ugly", but you were too shy or too modest or your mother taught you better. Trump's "Make America Great Again" campaign is aimed at everyone - let's get back to the land we knew when we seemed the most free and most prosperous.

Lastly, third party front runner for the Libertarian ticket - Gary Johnson. His campaign slogan is "Our Best America Yet."

Obviously, this is an attempt to satire Donald Trump's "Make America Great Again."

I voted in the primary. I hope you did too. Did you get a chance to vote for Gary Johnson? I didn't. I didn't even know he was running until he said he was chosen as the libertarian candidate. I was actually disappointed because I identify most with libertarianism. I wanted to choose the candidate. I personally do not want Gary Johnson's version of America if that means some secretive elite groups who think they know better than me make decisions for me.

The best America yet would be where Gary Johnson was chosen by landslide votes of the American people like Trump or Hillary. Especially in the Republican Party - a wide variety of candidates from every background and qualification was offered.

I believe the country as a whole would be best served by a libertarian, but I'm not sure we need leadership looking for the best America yet. It seems like presidents who use those words are prefacing a major conflict. Look no further than Lincoln before the Civil War or Kennedy before Vietnam. Gary Johnson's "best America yet" may be the world's worst nightmare yet.

Nothing I have seen or researched indicates that Gary Johnson could deliver on his campaign motto.

One should not be voted for simply because they are a third choice.