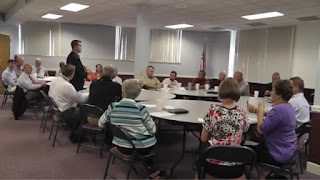 Easley Representative Neal Collins organized a meeting called "Pickens United" with the stated purpose of better communication with local and state government. The ground rules are "no questions and no complaints".

A commonly considered maxim of communication is questioning; as is listening.
The meeting was held in the morning on a weekday, a time when most would be unable to attend.

It is unclear what the mission of this group is, but after watching the two videos below, you get the idea that the topic is "funding above everything else". You also get the idea that spending cuts and efficiency are not part of the "communication".

It's very interesting that greater than 90% of those in attendance have never attended or only attended when campaigning any of the Conservatives Of The Upstate meetings, Taxpayers Association meetings, or Republican monthly meetings. In fact, the leader, Neal Collins has missed required Legislative Delegation meetings without reasonable explanation.

The next meeting of Pickens United is on October 31, 2016. Appropriate! Politicians wear many masks. Maybe they will come dressed as themselves - masks on.