Last night's County Council meeting turned up some important things ...
First, was from our standpoint was the Tri County Tech $6.5 million dollar request from the citizens of Pickens County. I read the SC Constitution Article 11 section 3 to the council which says that the State is responsible for funding education of this sort. It was also brought up that the State is refusing to fund both education in Pickens County (K through 12) as the Constitution provides and other State mandated items. Taxes for this purpose are funded through the sales tax which has been collected since the 1950's. It is noted that the State General Assembly has at times spent our money on other noneducational things like dredging the Charleston harbor.
(It can be argued that the dredging helped people in the upstate too, but there must be compliance to the law or we just don't have a working system of government.) I heard some growling by two of the Council members that we should help those young people who are just trying to better themselves and we are. That is why we send sales taxes, lottery money, income tax, alcohol and tobacco tax, and other various taxes to Columbia. I also stated that we have just hired a full time County lawyer and that through him we should demand The General Assembly do their job: Sue if necessary.
My second statement was about the Pickens County jail situation. I noted that the City of Liberty has jail space and they are sending a number of the city inmates to the County jail facilities, while also receiving juvenile offenders from other counties. I was quickly reminded that this practice has been stopped, juveniles are being sent to Greenville, that Liberty is not going to have jail facilities, and will send offenders to County facilities ~ which in my opinion is ridiculous. The cities will not help their own problem if they can send it somewhere else. The practice is also being done in Clemson where students are housed in Clemson and city arrests are shipped off to the county jail. I am not totally sure of this procedure. In a meeting with Jennifer Willis during a recess of the June meeting, I reminded her that the $23 million in over-collected funds that the county has reserved for a jail does not belong to the Council and should be refunded to the citizens. Neil Smith also heard this conversation. I recommended that the funds be put on the ballot in November and the people be allowed to say that they want their money to go for a jail or not.
A county resident, Ms. Clark complained about the new fire fee of $135 and said that the meeting that was held was not properly disseminated to the public. She also objected to raising a trailer $100.00 and at the same time a million dollar house is going to be raised the same amount. The council responded that the new fees were put on by the recommendation of the local fire chiefs and the county council only approved their recommendation.
There was a suggestion of recording the county council meetings and putting it on the internet. This was approved and the County Administrator will research the cost.
There was also a presentation of a plan to repair, replace and extend the sewers in the county. This is going to cost millions and any new lines must be put in front of the people in a referendum. You all need to familiarize yourselves with the SC Constitution concerning this matter. The people affected by this cost are to vote and the cities should pay their share and unaffected areas should not have to pay for sewer they do not have. The current sewer tax in my opinion is unconstitutional. This is like other things that have been run over the people's head. Just like the new schools. I see multiple tax increases coming that will cause the loss of houses and cars. Please pay attention.
Also, Gerald Wilson was named County Administrator. Gerald has always been very cooperative and helpful to me and my family. I see him as potentially a great hire. Call him and congratulate him and express our desire to work with this Pickens County man.
Junius Smith
President, Conservatives Of The Upstate
No comments:

Our monthly meeting will be this Thursday at
Blue Ridge Bible Church
769 Belle Shoals Road
Pickens SC 29671
at 6:30 PM.
Will will discuss our gains and losses in the latest Republican Primary. There has been a proposal to notify the newly elected County Council members and our new Senator of the legal aspects of some of their comments post election.
We will discuss the Tri County Tech $6.5 million dollar request for a new building, the over-collection of millions of dollars in taxes, the shuffling of funds between accounts, the sewer fees without a vote of the people, a new $23 million dollar jail and the Council Oath of Office. If we do not make a move here, we can kiss our County goodbye as the new elections have produced at least two Republicans that do not intend to follow the Republican platform.
I am depending on you all to come and present your ideas about what we should do.
Junius Smith
President Conservatives of the Upstate
No comments:

Pickens County Moves To The Left ... 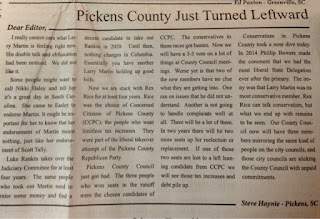