Despite Facts, "The We Want It Because We Want It" Crowd Refuses To Listen ...

Conservatives have answered every question "they" have asked with facts, screenshots, and quotes.

What's the response you get?

"You didn't answer my question."

It's almost a comedy routine.

A summary of facts:

- The school district is accredited through 2019. Period. (See picture)

- The board, in the chairman's own words, "would amplify dysfunction" with 7 members (see screenshot)

- AdvancED has apparently accepted anonymous letters and surveys from "special privilege stakeholders" (No one from Conservatives Of The Upstate, nor were conservative teachers asked to fill out the surveys). The anonymous comments are negative. Any positive comments are specifically attributed to specific board members and the superintendent that have not displayed conservative finance, principal, or management.

- The board, in the chairman's own words, has made great progress.

- The board, in the former chairman's own words, "we've only had 9 tie votes" out of (700+ votes) since the reduction of at large seats. All but TWO of those votes had no compromise and resulted in the measure not passing."

ONE of those votes was not an issue under the purview of education (board prayer) and therefore not a concern to board conduct under AdvancED "monitoring".

- Concerning prayer vote: It should show AdvancED that certain board members; Swords, Edwards, Cooper are not listening to their largest "stakeholders" - parents, pastors, taxpayers. Same with the 7th School Board member "issue" Same with the tax increase.

- During this vote on prayer that was outside the purview of AdvancED, one board member who is being called into question for his conservative votes asked the board peacefully, kindly, and professionally "Is there no compromise whatsoever here? What can we do to get this to a point of passing for you?"

Another board member who is also being attacked for conservative votes said, "this is clearly the will of the people" and "I think it would be cowardly to go home to my son and tell him we didn't pass a prayer policy that my constituents and we personally believe in"

- Pickens Senator Larry Martin thinks at large seats or seats in the Easley or Clemson areas would cause maligned representation and be open to money or special interest. Further, he believes redistricting and at large seats are unfair to minorities.

- In October 2013, a legislative delegation meeting was held to specifically address the 7th School board member issue - 22 of 25 speakers spoke out against adding a 7th school board member before a crowd of 100. The crowd applauded loudly for most of the 22 speakers.

2) There is no money in the budget for this cost

(County Council lives within their means and REGULARLY states this)

3) The monthly stipend, plus 4 year re-election costs to the county top an additional $6000 per year.

(Or nice maintenance, some sports equipment, more iPads, a teacher bonus or two)

- Teachers in SDPC may not have gotten all the raises that teachers in surrounding districts have BUT, it is easier to commute within Pickens County, overall it is safer, and the school district swallowed all but roughly $120 of $1000 plus in additional healthcare costs that OTHER districts gave raises to their teachers just to cover. We also have stellar facilities with kind support staff.

- A petition of 2050+ Pickens County residents was obtained in the dead of a rough winter for "no tax increase". Less than 50 refused to sign it, less than half of those because they wanted a tax increase.

"We need an odd number of board members."

Proposition; reduce board to 5 from 6.

But 2 from Easley would be unfair to the other districts. If you go to 5 we could have even more money in the budget and Liberty and Easley would get a larger district and therefore more say.

So, the end result, despite the facts - 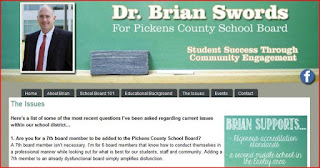 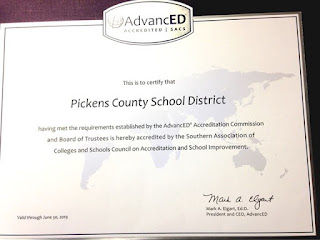