Can you afford an 8% tax increase?

The tax increase will also affect your residence.

Could your family use an 8% raise this year?

The Pickens County School District Administration thinks they need your money more than you do.

There is an attempt to increase property taxes in Pickens County School District an additional 8%.

Go to www.conservativesoftheupstate.com to find out how you can sign a petition to stop the tax increase.

Contact your School Board members and tell them to do this:

#1 Stop spending money on wants and learn to follow a budget like the tax payers must do.

#2 Don't kick the can down the road; stop raiding the escrow account to pay down debt.

These are your ELECTED school board members you should contact to STOP THIS 8% TAX INCREASE:

(Call and tell him to vote NO tax increase.)

$11,600 is the school DEBT each house owes thanks to our Pickens County School District board.

"In education, they say either property taxes have to go up, or we'll have poor education – that's a false choice."

The school district is trying to raise property taxes at a time when people are struggling to make ends meet. The final vote should take place by March 23, 2015.

Since 2007 there has been a 37% tax increase in the Pickens County School District with no increase in number of student enrollment.

The School District of Pickens County Wants More of Your Money.

It's Not a Crisis!

Their Wants and Mismanagement of your Money Does Not Constitute a Crisis!

Be there, be heard, don’t be plundered! 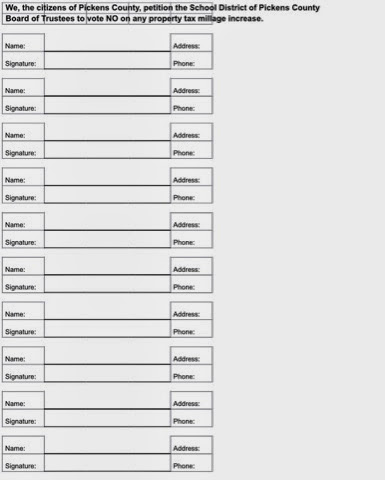