We'll Let YOU Pay For It Because WE Don't 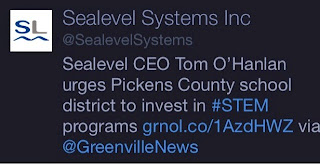 Sealevel Systems pays a reduced tax called a "fee in lieu of taxes" ...

Roughly 58% of business taxes in Pickens County goes to the schools.

According to Pickens County Auditor, Brent Suddeth Sealevel's School taxes would be broken down thusly:

If Sealevel weren't paying this fee in lieu of taxes, their total tax bill would be:

This would bring in an additional $4,250+ of revenue DIRECTLY to the school district if Tom O'Hanlan were doing with his multimillion dollar business what he's asking the average below poverty line citizen in Pickens County to do.

Email ThisBlogThis!Share to TwitterShare to FacebookShare to Pinterest
TAGS: taxes