"We The People" doesn't mean everybody? 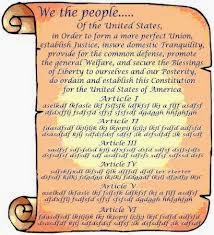 
Words We Live By: Your Annotated Guide to the Constitution.”

Page 95 of Appendix B of the Common Core English Standards, there's this selection:


[The first three words] of the Constitution are the most important. They clearly state that the people—not the king, not the legislature, not the courts—are the true rulers in American government. This principle is known as popular sovereignty.

I guess this doesn't take into account the fact that in 1787 there was no longer a king in American government.


But who are “We the People”? This question troubled the nation for centuries. As Lucy Stone, one of America’s first advocates for women’s rights, asked in 1853, “‘We the People’? Which ‘We the People’? The women were not included.” Neither were white males who did not own property, American Indians, or African Americans—slave or free. Justice Thurgood Marshall, the first African American on the Supreme Court, described the limitation:

For a sense of the evolving nature of the Constitution, we need to look no further than the first three words of the document’s preamble: ‘We the People.’ When the Founding Fathers used this phrase in 1787, they did not have in mind the majority of American citizens . . . The men who gathered in Philadelphia in 1787 could not have imagined, nor would they have accepted, that the document they were drafting would one day be construed by a Supreme Court to which had been appointed a woman and the descendant of an African slave.


I say The Constitution meant everyone when it said we had God given rights.