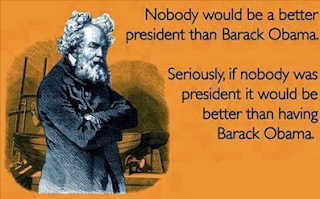 Email ThisBlogThis!Share to TwitterShare to FacebookShare to Pinterest
TAGS: humor

Maybe This Is What They Meant By "The Green Alternative" 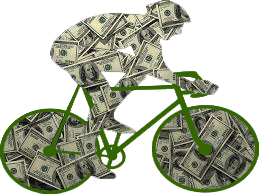 Bicycle trails are being pitched as means of "safe, green, free" exercise.

It seems as if all three of those benefits are now in question.

With the safety concerns of the Swamp Rabbit Trail (and other similar trails across the country) being so high that an millions in police protection being added, from studies that find that the air may not be so healthy to breathe as trails border roads and walkers and bikers breathe in car fumes, now comes word that bicycles are being considered for taxation.

Email ThisBlogThis!Share to TwitterShare to FacebookShare to Pinterest
TAGS: Agenda 21, doodle trail, Its not easy being green

Conservatives Of The Upstate
No comments:

On Thursday January 2, 2014, there will be a meeting of our legislative delegation (Hiott, Skelton, Owens, and Martin).


It will be held at the Dacusville Community Center at 5:30PM.

There are many issues we need to bring to them like education, ethics, and tax reform. This will also be a good time to talk about pre-filed and pending legislation. It will be a good opportunity to express our opinions on the Hiott-Skelton at-large school board bill too.

The next Conservatives Of The Upstate meeting will be Thursday January 9, 2014

We have a lot of things to discuss - including how we will continue to make the most difference with ACTION of any Upstate conservative group.

The next Pickens County GOP meeting will be Thursday January 16, 2014. The guest will be Senator Lee Bright, candidate for U.S. Senate; opposing Lindsey Graham in November 2014.

An "Ask Anything" Town Hall will be held @ Gettys Middle School Auditorium with Dr. Kelly Pew on February 25, 2014 at 6:30PM

The meeting will include an open-mic session for you to ask questions.

You can email your questions beforehand … Send them to ask@pickens.k12.sc.us

Look Them In The Eye & Ask Tough Questions

Look Them In The Eye & Ask Tough Questions
by Michelle Wiles

There will be a Pickens County Legislative Delegation meeting on January 2, 2014 at 5:30PM at the Dacusville Community Center. This will be a great time for all citizens to look our delegation, Larry Martin, Phil Owens, BR Skelton, and Davey Hiott, in the eye and ask tough questions about why South Carolina's educational system, our ethics laws, and our roadways are consistently rated some of the worst in the nation. These guys have been in Columbia for years, and we still see little to no improvement in these core functions of government.

We can also ask why our delegation overwhelmingly voted against Governor Haley's common sense budget reductions. It seems odd that they would vote against common sense measures to reduce spending in June, and now there is talk of tax increases to fund road work. Why do they always look to grow government and spend more? We need less, more efficient government. Another example is the Hiott-Skelton at-large school board bill. Do we really need more politicians in education, or do we need to focus on teachers and students? I believe we need to listen to and support teachers, and reduce the number of politicians with their fingers in the pie.

I hope to see you on January 2nd in Dacusville!

Could Dissolving The Education Oversight Committee Be South Carolina's Answer To Common Core?


A bill prefiled for the 2014 legislative session would get rid of the Education Oversight Committee and hand the bulk of its power to the Superintendent of Education. That may sound like bureaucratic shuffleboard, but it would make an important change. Right now, citizens have virtually no real voice in determining whether the Common Core Standards are imposed on our schools or not.

This bill could dramatically change that – and it doesn't even mention Common Core. 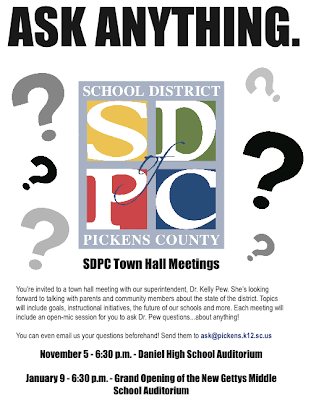 From The School District Of Pickens County:

You’re invited to a town hall meeting with our superintendent, Dr. Kelly Pew. She’s looking forward to talking with parents and community members about the state of the district. Topics will include goals, instructional initiatives, the future of our schools and more. Each meeting will include an open-mic session for you to ask Dr. Pew, Pickens County Superintendent, questions.

Come out to see the newly renovated Gettys Middle School Auditorium and attend a town hall meeting with our superintendent, Dr. Kelly Pew on February 25, 2014 at 6:30PM

The auditorium, which was built in 1939 has been rejuvenated to serve students for decades to come. Dr. Pew is looking forward to talking with parents and community members about the state of the district. The meeting will include an open-mic session for you to ask questions...about anything!

You can even email us your questions beforehand! Send them to ask@pickens.k12.sc.us.

On Saturday December 7, 2013, a local chapter of SCPIE (South Carolina Parents Involved in Education) was denied their 1st amendment rights … being told by a representative from Dunburk's Events in Easley that the peaceable group would not be allowed to carry signs in the parade because the "group was political".

Upon reading the city ordinances … there is no such restriction for parades or even protests. Furthermore, if politicians participated in the event - are they not political?

See the video and a full story that's getting national attention:

Lowering The Flag To ½ Mast For A Marxist?

Lowering The Flag To ½ Mast For A Marxist?

On Thursday afternoon, President Barack Obama made a presidential resolution that flags across the country should be flown at half-mast to honor the passing of African revolutionary; Nelson Mandela.

On Friday, Liberty resident and Pickens County Sheriff, Rick Clark noted on his facebook page that he would not comply with the resolution on the grounds that Mandela was neither an American citizen nor served the United States in any official capacity.

While I believe Mandela to be a revolutionary (in all senses of the word - both good &amp; bad) … I do believe Clark is correct on this matter - even in an unaddressed way.

Mandela was a great man. He had a big heart. He was though, also a communist - a marxist! We cannot and should not honor an admitted and detail doctrine adhering marxist with one of our highest honors. The honor is strictly reserved for those AMERICANS that have served our country - military, extraordinary emergency response, exemplary longstanding political office, and notable service to the community, state or country - that's it.

Be serious for a moment - when the Ayatollah passes should we honor him with our highest honor? He is also a world figure recognized for goodness, but is the spiritual leader for radical Islam.

Should we give the honor to the reverend Billy Graham when he passes? Absolutely! He IS an AMERICAN spiritual leader with an exemplary and notable impact on this country.

Please stop saying this is racially motivated or even racially stereotypical of something that would happen in the South.

I'm proud of Clark for doing this not just because it was correct, but it shows me that he stands behind the citizens of Pickens County FIRST! That goes a long way with me - realizing some inevitable future events.

Philip Smith
Webmaster, Conservatives Of The Upstate
No comments: 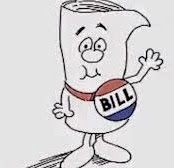 In December of each year, SC legislators pre-file bills to be considered for the upcoming 2014 SC legislative session in January.

Here's a list of the bills pre-filed so far …

* Tip to Spartanburg Tea Party for the info & link
No comments:

It's December! That means Christmas is in full swing! Just a reminder, if you have a real tree inside your residence or business please make sure it's properly watered. A dried out tree with lights on them can go up in flames in minutes; followed by the rest of the room. Lets all have a safe Christmas/Winter Season. (SCIA—01)