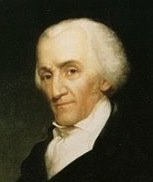 "Whenever governments mean to invade the rights and liberties of the people, they always attempt to destroy the militia, in order to raise an army upon their ruins." ~ Elbridge Gerry

Elbridge Thomas Gerry (July 17, 1744 – November 23, 1814) was an American statesman and diplomat. As a Republican he was selected as the fifth Vice President of the United States of America, serving under James Madison, from March 4, 1813 until his death a year and a half later.

Gerry was the first Vice President never to run for President of the United States.