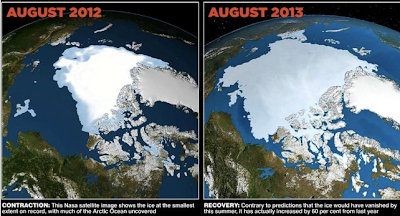 Gone are the days when "environmentalist whackos" use the term "Global Warming". Why? Because it just isn't happening.

Instead, they use the word "Climate Change" now. Good word, much more vague. It will fit into any sentence or statistic the left throws out there now.

From The Daily Mail UK:

A chilly Arctic summer has left nearly a million more square miles of ocean covered with ice than at the same time last year – an increase of 60 per cent.

The rebound from 2012’s record low comes six years after the BBC reported that global warming would leave the Arctic ice-free in summer by 2013.

Instead, days before the annual autumn re-freeze is due to begin, an unbroken ice sheet more than half the size of Europe already stretches from the Canadian islands to Russia’s northern shores.

Email ThisBlogThis!Share to TwitterShare to FacebookShare to Pinterest
TAGS: Agenda 21, Its not easy being green, sustainable development