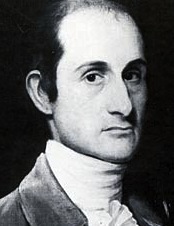 "Providence has given to our people the choice of their rulers and it is the duty as well as the privilege and interest of our Christian Nation to select and prefer Christians for their rulers."

John Jay was an American politician, statesman, revolutionary, diplomat, a Founding Father of the United States, President of the Continental Congress from 1778 to 1779 and, from 1789 to 1795, the first Chief Justice of the United States. During and after the American Revolution, he was a minister (ambassador) to Spain and France, helping to fashion United States foreign policy and to secure favorable peace terms from the British (the Jay Treaty) and French. He co-wrote the Federalist Papers with Alexander Hamilton and James Madison.

Jay was Governor of New York from 1795 to 1801 and became the state's leading opponent of slavery. His first two attempts to pass emancipation legislation failed in 1777 and 1785, but the third succeeded in 1799. The new law he signed into existence eventually saw the emancipation of all New York slaves before his death.

The John Jay College Of Criminal Justice in New York is considered one of the most elite colleges for criminal justice attorneys.