Freedom From Religion Foundation - Not Even Quotes Are Safe? 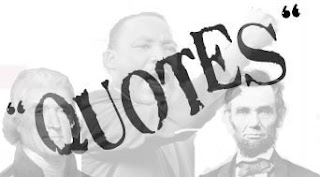 The Freedom From Religion Foundation, the organization that bullied the Pickens County School Board into dropping prayers mentioning Jesus before school board meetings has a new target; quotes from famous people.

You read that right.

"That this nation, under God, shall have a new birth of freedom."
~ part of The Gettysburg Address by Abraham Lincoln

(found at the Lincoln Memorial and on U.S. Passports)

"The God who gave us life, gave us liberty at the same time."
~ Thomas Jefferson

(found at the Jefferson Memorial)

"We have a great dream. It started way back in 1776, and God grant that America will be true to her dream."
~ Martin Luther King, Jr.

The FFRF is demanding that the U.S. State Department remove these quotes – which were actually said, by real national heroes, at historically significant moments, about pivotal events in our nation’s history.

If they mention God, we have to remove them from history?

The First Amendment is not a mandate to whitewash history. The Constitution is not a manual for the cleansing and expulsion of religious references from public life.

The Supreme Court has specifically held that to follow such a legal argument “...would be to find in the Constitution a requirement that the government show a callous indifference to religious groups. That would be preferring those who believe in no religion over those who do believe.”