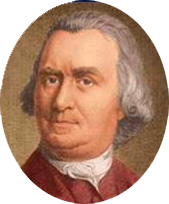 "We live in an important age, an age in which we are called to struggle hard in support of the public Liberty."

Samuel Adams (1722-1803) was an American statesman, political philosopher, and one of the Founding Fathers of the United States. As a politician in colonial Massachusetts, Adams was a leader of the movement that became the American Revolution, and was one of the architects of the principles of American republicanism that shaped the political culture of the United States. He was a second cousin to President John Adams.