Conservatives Of The Upstate: A Look At The 1st Amendment: Part 1: Freedom Of Religion 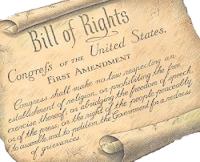 "Congress shall make no law respecting an establishment of religion, or prohibiting the free exercise thereof; or abridging the freedom of speech, or of the press; or the right of the people peaceably to assemble, and to petition the Government for a redress of grievances."

1) Congress … this indicates that only the United States Congress has the power to alter our unalienable rights.

This said, the Bill Of Rights (or the first ten amendments to the constitution), is a clarification of what our God given rights are. These rights are presented in CLEAR language. The Bill Of Rights is a list of rights that not even the United States Congress can "toy with".

2) shall make no law … it doesn't get any more poignant than that. NO LAW can be made that would infringe upon these rights enumerated in this amendment.

3) respecting an establishment of religon, or prohibiting the free exercise thereof … That is to be said all together - it's not two sentences.

If asked, many people cannot quote the first amendment and instead say something similar to:


"Well, there's the whole separation of church and state part."

Do you see anything remotely close to the words "separation of church and state"?

Where did "separation of church and state" come from then …


The Danbury Baptist Association of Danbury, Connecticut sent a letter, dated October 7, 1801, to the newly elected President Thomas Jefferson, expressing concern over the lack in their state constitution of explicit protection of religious liberty, and against a government establishment of religion.

In their letter to the President, the Danbury Baptists affirmed ...

"Our Sentiments are uniformly on the side of Religious Liberty — That Religion is at all times and places a matter between God and individuals — That no man ought to suffer in name, person, or effects on account of his religious Opinions — That the legitimate Power of civil government extends no further than to punish the man who works ill to his neighbor…"

As a religious minority in Connecticut, the Danbury Baptists were concerned that a religious majority might "reproach their chief Magistrate... because he will not, dare not assume the prerogatives of Jehovah and make Laws to govern the Kingdom of Christ,"

Thomas Jefferson's response, dated January 1, 1802, concurs with the Danbury Baptists' views on religious liberty, and the accompanying separation of civil government from concerns of religious doctrine and practice. Jefferson writes:

"...I contemplate with sovereign reverence that act of the whole American people which declared that their legislature should 'make no law respecting an establishment of religion, or prohibiting the free exercise thereof,' thus building a wall of separation between Church & State."

This doctrine, which has become known as the "wall of separation" or "strict separationism," would later become highly influential in 20th century Supreme Court understandings of the relationship between church and state.

The letter is nothing more than a historical outlier. It is not law.

Jefferson's letter is almost always taken out of context

wikipedia: wall of separation of church and state.