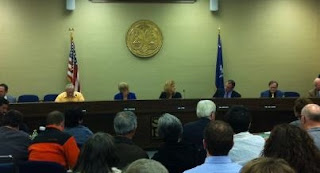 One of the messages Pickens County residents had to endure at the recent School Board meetings was that prayers had to be limited. Residents heard that the "main crux" of the 1st amendment was what lawmakers interpret as "The Establishment Clause".

Pickens County residents were shown stacks of paper that supposedly substantiated claims that various board members had read various cases like Marsh vs Chambers that supposedly supported a twisted Constitutional misinterpretation of a separation of church and state that various atheist organizations have latched onto into recent months.

Pickens Trustee, Alex Saitta indicated that he'd spent almost every day for the last three months pouring over cases and there just wasn't much hope based on the results.

"The courts are stacked with liberal activist judges who are deciding these kind of cases. Where we need to take action is electing a president that will put more conservative judges in place. Obama isn't doing that so there's not much hope with winning cases like this", said Saitta.

On Tuesday, 26 March 2013 … The 9th U.S. Circuit Court of Appeals upheld the constitutionality of a City Council's prayer policy.

The court emphasized that because Lancaster's policy takes great pains to avoid favoritism in determining who will give the prayer, the fact that the policy does not require non-sectarian invocations is unconcerning.

Contained in the ruling …


"So long as legislative prayer—whether sectarian or not—does not proselytize, advance, or disparage one religion or affiliate government with a particular faith, it withstands scrutiny ...

For these reasons, we join several of our sister circuits in concluding that neither Marsh nor Allegheny categorically forbids sectarian references in legislative prayer."

“… what matters under Marsh is whether the prayer to be offered fits within the genre of legislative invocational prayer that has become part of the fabric of our society,”

The ruling integrated language from two famous cases … one being the main case Pickens Board members and legal representation have been citing … Marsh vs Chambers.

The ruling also made the point that possibly, by structuring the Council's prayer, restrictions may disrupt, offend, and even force proselytizing.

The fact that the body may endorse a religious perspective each time it meets "is irrelevant under The Establishment Clause".

The 9th Circuit heard arguments that if a citizen were to attend just one meeting where sectarian prayer was particularly Christian that the citizen might assume that in order to do business with that City - one must be Christian. The 9th Circuit said that was the wrong test to measure the council's invocations.

The question in this case is not just whether, given the frequency of Christian invocations, the reasonable observer of Lancaster's City Council meetings would infer favoritism toward Christianity, but whether the City itself has taken steps to affiliate itself with Christianity or taken targeted action to "establish" a particular faith.

In an 11th Circuit opinion in Florida …


"Lakeland [Florida] maintains that Resolution 4848, adopted a few months after [Atheists Of Florida] complained in March 2010 about its practices in selecting invocation speakers, does not violate the Establishment Clause of the First Amendment or Article I, Section 3 of the Florida Constitution because it requires that invitations to participate be extended to all religious groups. It also asserts that this Court should not consider the merits of [Atheists Of Florida] claim that Lakeland’s pre-March 2010 practices were unconstitutional because that issue became moot with the codification of Lakeland’s practices in Resolution 4848."

Lakeland Florida's Resolution 4848 concerning invocations was very similar in nature to Pickens County's policy BEFORE the cowardice of the Pickens Board and the bullying threats from The Freedom From Religion Foundation.

So, from Florida to California … coast to coast … states that in terms of the courts could be considered "liberal and liberal-er" come two rulings that say that Pickens County not only backed down without a fight, but didn't even lick their finger to see which way the wind was blowing.

"The courts are stacked with liberal activist judges who are deciding these kind of cases. Where we need to take action is electing a president that will put more conservative judges in place. Obama isn't doing that so there's not much hope with winning cases like this", said Saitta.

Obama has appointed both 9th and 11th Circuit Court judges.

Read the two cases:
(will open a PDF)

Read about Marsh vs Chambers:

A recent case in Mississippi: