"It was the image of a gun printed on Jared's t-shirt that sparked a dispute between a Logan Middle School teacher and Jared, that ended with Jared suspended, arrested and facing two charges, obstruction and disturbing the education process, on his otherwise spotless record."

The Logan County School District's dress code policy prohibits clothing that displays profanity, violence, discriminatory messages and more but nowhere in the document does it say anything about gun images.

Logan City Police did confirm that Jared had been arrested and charged.

If the story sounds absurd to you, look at this image of the statue in front of the middle school: 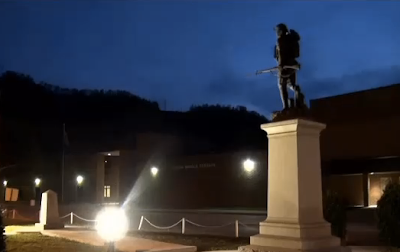 For the full story, read:

[UPDATE] The student was arrested and suspended a 2nd time after earing the shirt again on his first day back.