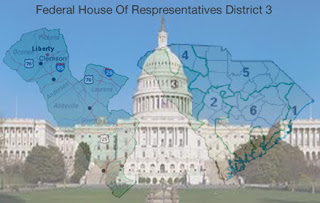 At what is considered a "beyond the last minute" deal for lawmakers, a "fiscal cliff deal" was passed on by the House and Senate of The United States at around 9PM on Tuesday night. The deal prevented taxes going up on almost 98% of Americans, extended unemployment benefits, but cut very little spending.

House of Representatives, District 3 Congressman Jeff Duncan (Which is inclusive of Pickens County) had this to say about his vote …

"I voted "no" on the Senate "compromise" on the fiscal cliff last night.

I am glad that the President and the Democrats have finally come to the realization that the Republican principal of lower taxes is the right thing for Americans. It is unfortunate that they still prescribe to the politics which are dividing Americans further - those of class envy and redistribution.

The American government spends too much. That is the bottom line.

Without drastic spending reductions and efforts to address our growing debt burden, there is a real likelihood that we could experience European-style defaults and inflation in the future. I cannot, and will not, in good conscious, support these redistribution, Occupy Wall Street style proposals that have been put forth by the Administration and the Senate. We must include spending reductions and real reform efforts if we are going to begin securing a brighter future for our children."