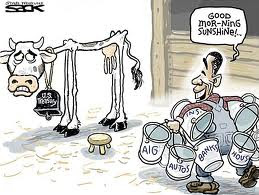 A bipartisan group of federal lawmakers are requesting that EPA Director Lisa Jackson answer questions including why the inspections are being conducted, how many flights have occurred, and whether they have resulted in any enforcement activities after the agency has been noticed using aerial surveillance to monitor livestock operations over their homes in Nebraska.

“Farmers and ranchers in Nebraska pride themselves in the stewardship of our state’s natural resources. As you might imagine, this practice has resulted in privacy concerns among our constituents and raises several questions,” says a letter signed by Republican Reps. Adrian Smith, Jeff Fortenberry and Lee Terry, as well as Democratic Sen. Ben Nelson and GOP Sen. Mike Johanns.

The Environmental Protection Agency uses aerial surveillance across the Midwest in states such as Nebraska, Iowa, Kansas and Missouri - and has defended the practice as cost efficient versus on site or on ground monitoring.

Email ThisBlogThis!Share to TwitterShare to FacebookShare to Pinterest
TAGS: epa, Its not easy being green