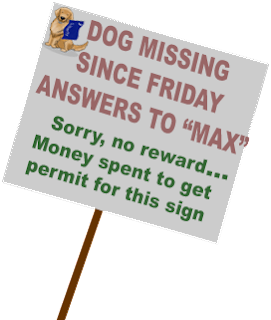 Fox Channel 28 News In Ohio reports:
… City officials in Newark, Ohio say [a woman's] signs are against the law, my FOX28columbus reports.
They say the signs are considered "promotional material," which require a permit.
Officials say they have received complaints over Gardener's signs.
"We found signs right next to the curb of a street, at intersections," Newark Engineer Brian Morehead said.
[The woman accused] said she didn't even consider the possibility she would need a permit to post her signs.
"When something that is living is gone, either a person or animal, you just don't think about stuff like that," she said. "And to go down and do paperwork for each sign was something that I didn't even fathom."
Gardener says she is hoping for a peaceful resolution.