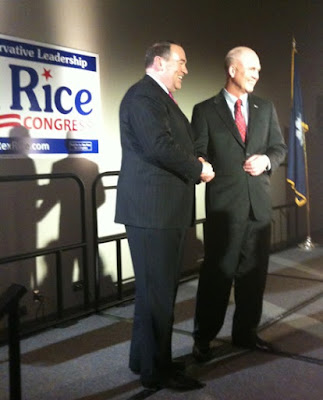 Rex Rice, currently State Representative for District 26 - (Greenville & Pickens Counties) is making his bid for Federal House Seat 3. This seat is being vacated by Gresham Barrett - who is running for South Carolina Governor.

• He identifies himself as Republican.

• He is a member of Easley Presbyterian Church

Here's some notes from the rally:

Chairman of The South Carolina Republican Party (SCGOP) Karen Floyd was introduced. She gave her support to Rice and indicated that she was delighted to have Mike Huckabee as the guest speaker.

Rice, came to the stage, and briefly spoke of his election since 1994 and that he has been energized to be involved since.

He discussed his many accomplishments.

After a brief self introduction, Huckabee stated,

"The smartest thing you could do is send Rex Rice to Congress."

"The government can only affect me to my grave, I'd be a lot more worried if I were 20 right now. We (referring to South Carolinians) need to send people like Rex Rice to start now and we need not focus (yet) on the 2012 Presidential race."

"When I see good people running for Congress ... I think, it's not those who are yelling and screaming ... it's principled people like Rex Rice that are getting things done."

"I told him I'd come to South Carolina and be for him or against him; whichever would help him the most."

Huckabee also hoped that everyone will pay attention to this next election. He mentioned that many are disappointed in the Obama administartion, especially the young people who voted for him, and that's a reason we've seen the tide turn in states like Virginia, New Jersey, and Massachusetts.

He said that Rice has clearly demonstrated the fact he didn't live on an expense account, billing the state for his travels and he is obviously a different breed of cat.

"The reason I have great confidence in Rex is because I've looked at his record."

"Rex Rice's campaign stickers were designed so you get 20% -40% better gas mileage if you put them on your car."

"Follow up with them," he said, "...make sure they vote. Call them a few weeks, a few days before the election."

He said the economy is going to stay unstable until we get stability in Congress.

He mentioned that people often tell a political candidate,

"Glad your doing this, I sure couldn't do what you're doing."

Huckabee then took a few questions from those in attendance.

A question about pairing up to bring the support from EVERY SIDE of the Republican and Conservative factions was made.

Huckabee stated, "My focus is getting people like Rex Rice elected now."

Should Republicans meet with the President?

* Conservatives Of The Upstate does not endorse any political candidate and was not compensated in any way for any promotion or structure of this posting.