An Opinion Piece By The Webmaster Of Conservatives Of The Upstate. 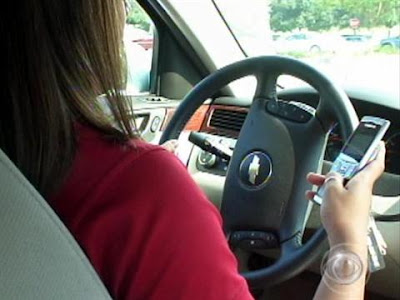 Last night I attended the February 2010 Conservatives Of The Upstate meeting ...

While there, I asked if I could speak ...

I asked everyone in attendance what they thought of the recent efforts to ban texting while driving.

I wanted to make it very clear before I mentioned my thoughts that I think texting while driving is dangerous, foolish, and I don't appreciate those that do it; potentially putting me or my family members in danger - especially with statistics showing that it's a growing public safety concern.

I then asked if anyone had eaten while driving, looked down to change the radio, or type in something on their GPS.

One comment was made, "I've seen a woman driving with her elbows putting on makeup."

I mentioned the number of twitter conversations I've had recently with SC State Representative Shane Massey (Shane was a guest at one of our Meet The Candidates nights.) regarding texting while driving as he helped debate the bill in a subcommittee.

• Enforcement of this law is an invasion of private property and should be seen as unconstitutional under the 4th amendment. Seeing a text message or even finding out your cellphone service provider is a violation of privacy.

* Police are entitled to reasonably attaining specifics about your car - which most police officers are able to do by a two second glance - I know I can. They are also entitled to the information on your state issued driver's license and state issued registration

* I trust in a police officer's ability to recognize reckless driving - if this is the charge - then he should have the right to pull me over - make the charge - issue a citation and let me go on my way - to pay my fine or show up in court and protest the charge.

• I have provided two scenarios:

- What if I had information pulled up on my iPhone about "homemade weapons silencers" (actually true ... out of curiosity, after watching an episode of "Forensic Files" I wanted to see why silencers are illegal.) Does this give an officer probable cause to search my car even though I've caused no accident or committed no crime against someone?

- What if someone as maniacal and "anything goes" such as Perez Hilton wants some confirmed gossip or rumor about a celebrity - could he pay off a police officer to pull them over and "look at their texts"? What about in the case of Governor Sanford - could someone have done this to him had we had this law in place?

• I've also raised the question to state legislators about how they plan to obtain cellphone records - when cellphone companies don't release that information under any circumstance other than terrorism or death threats now.

• I question whether the state or municipalities have considered the amount of training (and cost of that training) for all the different types of cellphones.

• I've said that the common argument for this law is,

"Other states are doing it?"

Other states are allowing legal marijuana.

Other states are allowing gay marriage.

This is South Carolina - we have always led the charge for freedom - we were the first to secede.

• Another common argument is statistics showing that it's worse than drunk driving.

Well, statistics also show that bans in other states have been ineffective.

• I've made the claim that "texting bans" are my generation's Brady Bill.

• I've framed all of my talks with this quote:

"Those who would give up essential liberty to purchase a little temporary safety deserve neither liberty nor safety." ~ Ben Franklin

Email ThisBlogThis!Share to TwitterShare to FacebookShare to Pinterest
TAGS: opinion