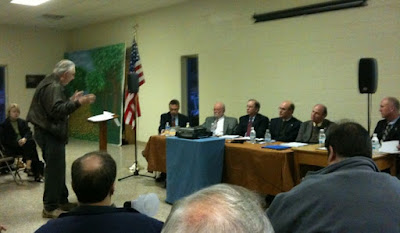 Conservatives Of The Upstate would like to thank all of the delegates for their warm reception to the presentation of our concerns.

Junius Smith, Conservatives of the Upstate President spoke on the school building plan.

Philip Smith (from ATLIBERTYTOSAY.COM) spoke about his website & concerns that have been raised by Liberty residents on his website:

(Delegates mentioned that they were aware that this applied mostly to lodging and would table and investigate the impact on retirement homes if the issue arose for discussion of the bill before a final vote.)

Discussion of moving the Pickens County Ozone Monitoring device away from Clemson. Statements were made regarding businesses not locating here because of the poor measurement and that Clemson is not an accurate portrait of the whole of Pickens County.


"If you're gonna run as a Republican, please vote like one."

• School choice - Christian values aren't being taught in schools because Christian teachers have been retiring for the last 15 years.

"Whoever you borrow from you are a slave to."

• A call for a return to State Sovereignty - refusing Federal mandates

• Statements regarding school building projects by out of state contracts ...

This was a very productive meeting with close to 80 in attendance.