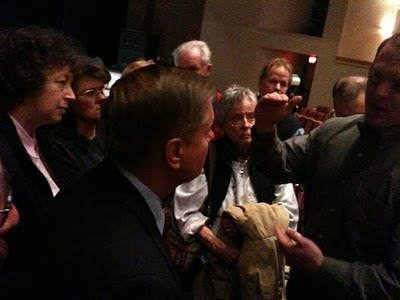 A number of members from Conservatives Of The Upstate attended the town hall meeting with Senator Lindsey Graham this past Tuesday January 12, 2010 in Clemson.

Lindsey Graham is our Federal Congressional Senator in Washington D.C. for the state of South Carolina.

He has a home in Seneca.

For some reason the event wasn't very well publicized in the news.

Many conservatives were outside with signs - protesting Cap & Trade.

One person was removed after standing up and yelling about civil war if mandatory health care is passed. He had on a bright yellow shirt labelled "EXTREMIST".

• Fair or flat tax and the importance of a Republican presidential candidate to make this a #1 issue in 2012.

The staging of this "town hall meeting" was hard to judge ... a lot of the event seemed planned rather than spontaneous ... while Lindsey Graham answered questions from all the current pot of issues ... he does know this area well and seemed to call on people he knew - purposely calling on a few weirdos to make it seem like some issues are brought up by whackos.

We are thankful to Senator Graham for having the courage and stamina to stand up for an hour and a half and then spend an additional 30 minutes discussing a few issues with people who stayed afterwards.

The Anderson Independent has a very good summary of the meeting: