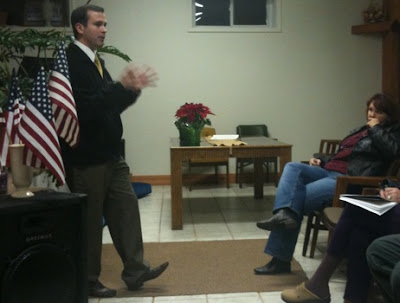 Tonight, at our monthly meeting, Conservatives Of The Upstate welcomed Neal Collins.

- He is a worker's comp attorney in Greenville SC.
- He was born in Easley SC.

• He is a graduate of Furman and the University of South Carolina School of Law.

• Neal mentioned that his platform is based on three R's:

Responsibility: He stated that he wanted to instill more personal responsibility rather than government dependance.

Recovery: He stated that two factors to recovery are linked: education & employment.

Reform: He said he believes a public official should have the political courage to not only discuss reform, but to offer his or her plan of reform.

Neil said, "I ask myself when making a decision, 'What role should personal responsibility play?'"

He stated, "I want to be a voice for fiscal sanity."

He says he does not believe in elected judges.

When asked what he sees for the future as far as industry and jobs in South Carolina, Neal replied:

"We need to protect small business." He also mentioned deregulation and the importance of education.

When asked if he would be interested in a SC State Legislature position if he were not moved forward in the primary?

"My drive is to better the community. If I can make an impact, I will consider it."