Area Politicians To Meet With The Public On Monday, January 11, 2010 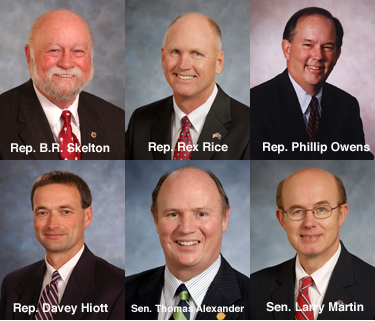 Area politicians will meet with constituents and have a chance to share their concerns and questions in January.

An annual meeting is scheduled for 5:30PM Monday January 11, 2010 at the Fellowship Hall of Six Mile Baptist Church.

The public is invited and encouraged to attend this open meeting.

To sign up to speak before the delegation, call the Pickens County Delegation office at 864-850-7070.

Those wishing to speak are allowed up to five minutes to address their issues.

President Of The Conservatives Of The Upstate, Junius Smith will speak about the lease purchase/school building program.

Check it out when you get a chance.
No comments:

Email ThisBlogThis!Share to TwitterShare to FacebookShare to Pinterest
TAGS: websites

Email ThisBlogThis!Share to TwitterShare to FacebookShare to Pinterest
TAGS: Reminders

The Conservatives of the Upstate wish each and every person a very
Merry Christmas and a Happy New Year.

We are tolerant of other religions and we expect others to be tolerant of ours. We are Americans not _____ - Americans. We enjoy freedom because all faiths and nationalities joined together and fought for it. We wish all ... peace and joy at all times, but when the light shines in the tower; Americans should rally to defend their freedom.

Our Christmas wishes this year include:

1. We wish for peace in Iraq and Afghanistan, and until this comes true; safety for our men and women of the armed forces.

2. We wish for Congress to return to the principals of government that our forefathers envisioned when they wrote the Declaration of Independence and the Constitution.

3. We wish for our State Legislature to follow the Constitution of the State Of South Carolina as they agreed to when they took an oath of office to uphold it.

4. We wish that our Pickens County Council and School Board would refund the nearly $60 million dollars that they've over collected from the taxpayers, and that they will cease breaking the law, and stretching the truth about their operations.

5. We wish that politicians in this State will stop voting to increase the salaries and benefits of family members, would refrain from nepotism in the hiring of employees, and excuse themselves from such votes.

6. We wish for construction to be stopped on all the new schools until all litigation is resolved, the entity selected in the constitution pays for them, and taxpayers are refunded the money that has been so far illegally collected.

7. We wish for all the people who have had their homes foreclosed on because of actions taken in Washington, the State, and the County - that they may find homes so that they may have a place to live while the School Board enjoys the stadiums, gymnasiums, and buildings that are being built without the vote of the people as required by the constitution.

8. We wish that every citizen in the Upstate would devote careful and considerate time to undoing the damage done by politicians over the past years. Attend meetings, go to tea parties, learn about Saul Alinski, Piven and Cloward, the facts surrounding topics such as; sustainable development, health care, Cap & Trade, and Bernard Shaw’s theory of socialism.

9. We wish for the people to read and study the Holy Bible every day.

10. We wish for people interested in education to read Return to Pumpkinville -which can be obtained through the Conservatives of the Upstate. It offers solutions and improvements to the cost and performance of education.

11. We wish that those interested in educating themselves read, The Nature of Man and His Government, and Why Wages Rise. These books can be obtained through our Amazon affiliate links on our website found at: WWW.CONSERVATIVESOFTHEUPSTATE.COM.

12. We wish for those who invested in gold & silver, as recommended by this newsletter six months ago, to enjoy your 25% gain. (Beware of further investment until you see the market will be favorable.)

_______________________________________
Senator Larry Martin is doing exactly what we said he would do. According to the Greenville News he has filed a preliminary bill to “further clarify” the intentions of the General Assembly concerning the obligation of the State to pay for school construction done by the lease/purchase agreements. As it stands right now, the State is obligated to pay because a lease has been ruled an operating expense and not a bond expense by the South Carolina Supreme Court. Any decent accountant knows this. Let Senator Martin and other elected officials know that you will not support anyone who votes for his bill.

As you know, the Pickens County School Board has borrowed (we think stolen) through over collection $400 million dollars to build and modify 13 schools. This is has been done while State of South Carolina faces 11% + unemployment, 1000s of repossessed homes, 600+ delinquent taxpayers, and test scores amongst our children continuing to go down.

Call your elected representatives and tell them you want them to quit spending! Remind them the that the $23 billion State retirement fund is under funded, and of the $1.4 trillion dollar deficit at the Federal level for just this year.

Call Jim Rex, State Superintendent of Education, and ask how it's possible to have budget cuts in education when the schools have had more money every year, including this one, and for the past ten years!

According to Indiana Republican National Committeeman Jim Bopp, who was the leading force in sculpting the “checklist” proposal; from now on, the RNC pledges that it will only back candidates who meet at least 8 out of these 10 requirements:

(5) We support legal immigration and assimilation into American society by opposing amnesty for illegal immigrants;

(8) We support retention of the Defense of Marriage Act;

(9) We support protecting the lives of vulnerable persons by opposing health care rationing and denial of health care and government funding of abortion; and

Bopp said of the checklist:

“We can’t demand 100% agreement on the issues and we should welcome divergent views,” he said, “But a in accepting diversity, a party must stand for principle. I liked what Ronald Reagan said [at the Conservative Political Action Conference in 1977] that a party must raise ‘a banner of bold colors and no pale pastels.’ We do this with a platform but we do nothing to hold anyone accountable. So the RNC gives money to [Pennsylvania Sen.] Arlen Specter in his ’04 primary battle and to [former Rhode Island Sen. Lincoln] Chafee in his primary battle in ’06 and they both later switched parties. Now the RNC has given $250,000 to Scozzafava, who is a party switcher-in-waiting. People like being loosey-goosy, and they hate being held accountable. But accountability is what we need.”

It's no so much that he was a great speaker. (he was)

It's that you can tell he meant what he said and cared deeply about his country and his countrymen and wasn't just telling us what government was going to do, but more so, inform the people on what the government isn't there to do. This speech carried so much more passion and depth than Kennedy's "Ask not what your country can do for you, but what can you do for your country". Reagan's inauguration speech was a well thought out plan with all scenarios taken into account. Have we had such a clear vision since?